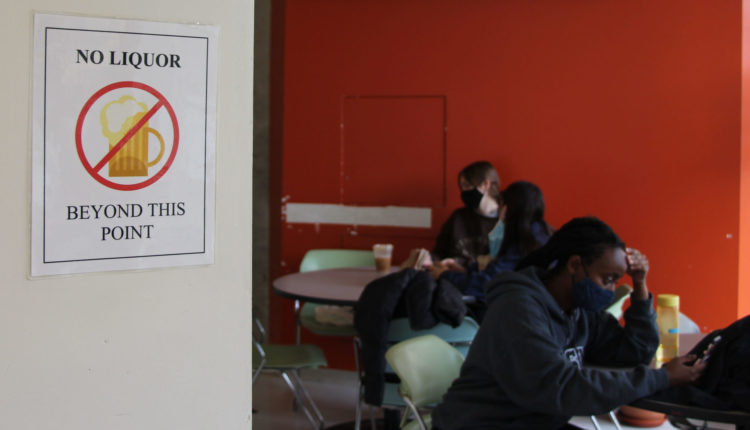 Since Langara Cafe used to serve alcohol, this sign indicates where you could drink in the cafe. Photo: Lesia Pogorelo

This story has been updated to include information about other post-secondary institutions’ campus pubs.

Langara College lacks a social atmosphere on campus that students and staff believe could be filled by a bar.

Second-year kinesiology student Saba Salehi said she doesn’t feel connected with other students, especially after more than a year of online learning.

She said she doesn’t think any issues will arise if a bar were to open on campus.

“As long as the students know their limits and understand the concept of having the bar in the campus,” Salehi said. “It’s not about just drinking, it’s about communication and making more connection and friends.”

Langara business instructor Deland Jessop says the college lacks a non-academic space on campus for students and staff to unwind after a long day. His suggestion is for the campus to open a dedicated bar.

“I think it also could be a revenue source for the school,” Jessop said. “It’d be great to have like a nice little atmosphere where me and a couple colleagues could go after work and grab a quick beer before we leave campus.”

Jessop said the bar could be run by a student club, which would supply jobs for them and management opportunities.

Liquor on the premises

The Langara Students’ Union used to have a liquor licence, but it hasn’t been restored since the pandemic started. Now, students feel the pandemic has caused Langara’s student body to become even more disconnected and they want an additional place to drink and socialize freely on campus.

Up until March 2020, two cafes in the LSU building served alcohol. David Han, manager of the Langara Cafe and The Union Cafe, said the two cafes did not renew the liquor licence when the campus shut down due to the COVID-19 pandemic.

According to Han, employees get many beer requests from customers, especially on Fridays.

An application for a new liquor licence was put in at the beginning of September.

“The liquor licence is in process,” Han said. “I am sure it won’t be done this year, we are hoping to get it by January or February.”

Other post-secondary schools in Metro Vancouver have bars and pubs.

UBC has four pubs on its campus, which students say contributes to a more interactive atmosphere.

Ananya Chavda, a fourth-year media studies student at UBC, said she visits a campus pub with her classmates at least once a week. Chavda said that in her second year, she and her classmates had a drink with their professor.

“It was very casual. It felt like you’re on the same level, like you can actually talk and approach your prof after,” Chavda said. “I don’t think you get many opportunities like that at other places.”

Some Langara students think that the college needs a policy to regulate a campus pub and patrons, otherwise it may disturb discipline and studying.

Third-year nursing student Josh Dabu said having a pub at Langara could be distracting.

“If everyone is able to handle themselves well enough to have a bar, I wouldn’t see why there is a problem,” Dabu said. “But who’s to say like the person beside me is gonna drink a lot and sort of be a disruption in class or whatnot.”

Langarans voice their thoughts on the campus opening a bar in this video by Lesia Pogorelo.