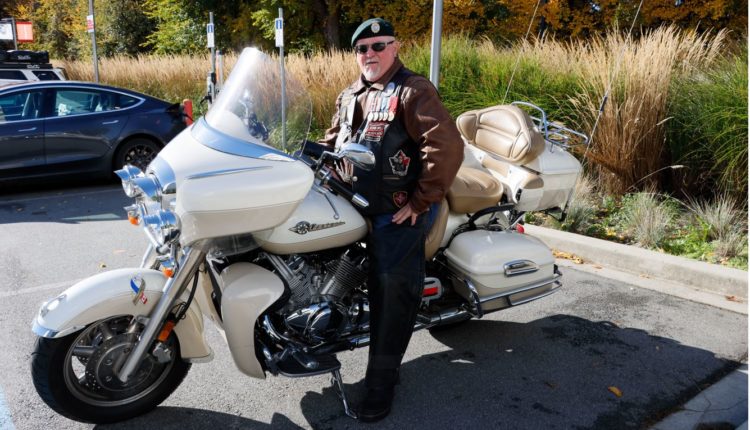 Bob Laing, a Canadian war veteran, sitting on his motorcycle outside of Langara College on Friday Oct. 29, 2021. Photo by Hollie McGowan

Canadian war veterans are finding camaraderie and healing in motorcycle clubs within the Metro Vancouver area.

Even years after leaving the military, retired soldiers are connecting with fellow veterans for support after experiencing the lasting effects of war.

Wayne Williams, a former reservist and member of the 56 Field Engineer Squadron, said both his bike and the veteran biker community act as companions, one that allows him to escape, and the other that understands his past military experiences.

“Call them your struggles or your demons or whatever you want to call them,” Williams said. “You can meet up with [other veteran bikers]. You ride with them, you can communicate, sometimes it’s not even through words, they just get you and you get them.”

More than just a club

Bob Laing, a retired sergeant and communications specialist in the Canadian military, said his community of veteran bikers continue to go out of their way to check in on him even when times are tough. Once when he was in the hospital after a serious bike accident, his veteran biker friends came from all over the Lower Mainland to check in on him.

“The guys that I ride with came from Agassiz, Mission, Abbotsford, Langley, Burnaby [and] Vancouver,” Laing said. “They all dropped in to see me to make sure I was doing OK, and make sure my family was doing OK.”

The network of veterans within the province is strong with a substantial number throughout British Columbia. According to Statistics Canada, there are currently 87,700 war veterans living in the province.

“[It’s] hard to live a civilian life after you’ve lived in the military.”

Healing on the open road

Veteran bikers note the therapeutic effects of simply getting on their motorbikes and going for a ride.

“I call it my wind therapy,” Williams said. “It allows you to be out; just have the wind in your face, be in a moment, appreciate your surroundings.”

Devin Wilkins, who was in the United Nations Protection force in Croatia during the Yugoslav wars and is currently a member of the Commandos Motorcycle Club, said his bike rides are a form of meditation for him.

“You have to be paying attention to what you’re doing,” Wilkins said. “So everything else falls away.”

Veteran bikers also mention the similarities between riding their bikes in a group and working together in the military.

“It’s also a formation. It’s us as a group,” said Robert Seckler, president of the Mainland Crew of the Veterans UN NATO Canada. “So it’s structured like the military … You’re trusting the people you’re riding with to keep you safe.”

Not only are they getting together to ride, but many of the veteran biker communities also do charity work raising money for other war veteran support services, military grave maintenance, seniors, bikes for underprivileged children, and service dogs for veterans.

“Our point is to help people, primarily veterans, but we’ll help anybody,” Wilkins said regarding his work with The Commandos Motorcycle Club. “It’s good for our mental health.”

This post has been updated to include comments from Devin Wilkins and Robert Seckler.