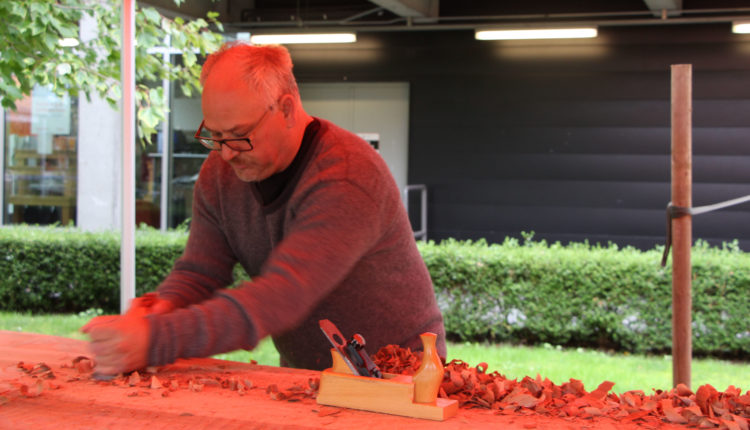 Aaron Nelson-Moody demonstrates how to carve wood for a couple of students at the Langara campus. Photo: Claire A. Wilson

This story has been updated to include quotes from Suzi Webster and Conor Kerr.

An Indigenous-led art project on campus aims to bring together the Langara community in a dialogue surrounding truth and reconciliation that will pave the way for future generations.

Aaron Nelson-Moody, also known as “Splash,” joined forces with Suzi Webster, an instructor in the Langara fine arts department, to create a multi-media art project called Being Human. The project has been in the works for some time but finally got funding in September.

The smell of cedar in the air greets students every Tuesday as Nelson-Moody carves outside the bookstore. This inviting environment allows students to connect with the history of the land and fosters discussions between Indigenous and non-Indigenous students.

“Langara being situated on a traditional Musqueam village site and the contemporary lands of the Musqueam peoples, it’s very important for us to be able to acknowledge that within all of our relationships,” said Conor Kerr, executive director of Indigenous initiatives and services. “This project in particular really speaks to that.”

As with the red dresses displayed on campus in October, some students may have noticed Nelson-Moody working outside. He believes it is vital students continue the conversation surrounding truth and reconciliation, and participate in the creation of the project through workshops and engagement with the artists. Many involved pointed to how making something together creates connections.

A main goal of the Being Human project is to leave the door open for future Indigenous artists to make their mark on Langara campus.

Shyanne Boudreau, Langara’s Indigenous student coordinator, pointed to place-based art pieces such as this one acting as a template for further projects and opportunities for students in the future.

“Not only does it foster future projects but it is bringing together various departments across campus,” said Boudreau.

These goals relate to the larger Indigenous idea of thinking seven generations ahead.

“The environment, the culture we leave behind, we want it to be better for the next generation, which means we should start now,” Nelson-Moody said. “Sometimes it’s a small beginning, like this carving in some ways isn’t going to change the fabric of Canada or truth and reconciliation.

“In other ways, it’ll change some people’s thinking, or some people will be curious about it the next time it comes up.”

The project’s goals are echoed in the carving materials. James Michaels, an Indigenous artist, laminated multiple boards together to create the wood that Nelson-Moody uses to carve pieces of the final project.

“In a way, that’s metaphorical for what we’re doing here in the college to various different people coming together with different grains, different histories, trying to be united in this effort to move forward,” Webster said.

According to Nelson-Moody, symbolic elements such as these provide areas rich in contemplation and conversation for Langara’s community.

Watch the video below to hear Aaron Nelson-Moody share details about the Being Human project: