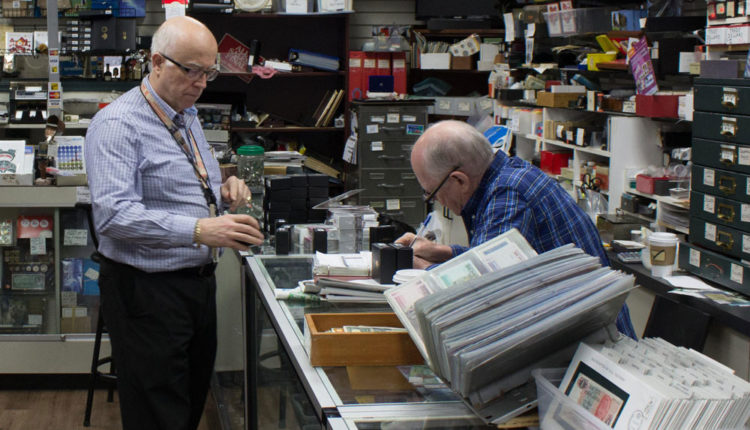 Coin collector believes the hobby could be something of the past

Entering Chantou Coins & Stamps in South Vancouver you may be startled by the lack of customers, or be overwhelmed by the plethora of collectibles and memorabilia which line the walls of the sizeable space. Coming across a coin and stamp shop like Chantou in Vancouver however,  has become a rarity – there is only handful left-  and as the coin business increasingly shifts online, the rareness will only increase.

Giuseppe Iorio, the owner of Chantou Coins & Stamps has been collecting coins since the moment he had some spare change in his pocket. Growing up in Montreal and not being able to afford rare and expensive pieces, the young collector hoarded all coins that were different and caught his eye.

Like many collectors, Iorio had a passion for coin collecting and wanted to make a career out of it, however he quickly realized opening a successful shop in Montreal wasn’t possible due to the  saturated market. In compensation, the coin collector became a banker – a job which harnessed his passion for coins and money.

However in 1971 after quitting his banking job, Iorio moved west to Vancouver to open Chantou Coin and Stamps first location on Richards and Hastings. Since then the store has moved from three locations before residing in South Vancouver.

Looking back on his history within the coin business, Iorio has minimal regrets regarding opening a coin shop, and hasn’t lost his passion for the hobby.

“The only thing that made me think twice about opening the business, is every year I have to pay the property tax,” said Iorio, “it’s so high I don’t understand how a small business can open up and succeed.”

Being new to Vancouver, having a business that succeed was all Iorio needed, although the business was nearing closure not because of high taxes, but due to a break in. The incident occurred in the first months of opening and with the high valued collectibles stolen, the business was on the verge of closure.

Future of the Hobby

The tough times weren’t over, as the coin business as a whole has been hit hard by the innovations of technology, which has taken the kids out of coin collecting. Iorio explained that when he opened the business, many kids and families involved, however video games have taken that aspect away.

Another factor which has pulled the youth out of the hobby, is the lack of involvement from schools. Iorio explained, that in his younger days schools would offer a coin and stamps clubs, so like minded collectors like himself could discuss their collections and trade between one another.