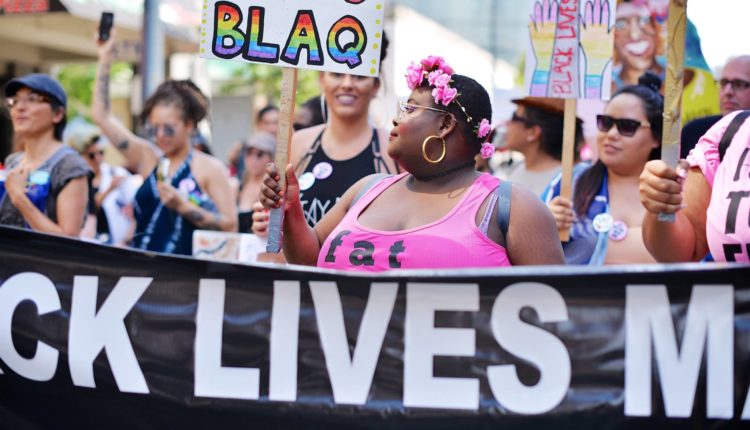 Fuelled by motivation to give back to her community, Joy Gyamfi radiates compassion through every aspect of her life.

Her contributions to Black Lives Matter Vancouver and her work at Gordon Neighbourhood House (GNH) prompted Gyamfi’s boss at GNH Paul Taylor, to nominate her for the Black History Month proclamation. Gyamfi was shocked when Taylor informed her that she had not only been nominated, but along with a few other recipients, had won the proclamation and was expected to accept the award in the beginning of February at Vancouver City Hall from Mayor Gregor Robertson himself.

“I’ve always known that whatever I end up doing in my life, I want to be able to help people in some way because I’ve benefited a lot from the help that I’ve received when I was growing up,” Gyamfi said.

After losing her father when she was 10 years old and watching her mother endure discrimination from her South Vancouver community, Gyamfi said there were times in her life where she wasn’t sure she would live to her current age of 20.

“When you face a lot of adversity growing up, it makes you empathize with others a lot more than other people who haven’t, and it’s motivating” Gyamfi said.

Black Lives Matter was began in New York after 17-year-old Trayvon Martin was posthumously placed on trial for his own murder while the killer, George Zimmerman, was not held accountable for the crime he committed. It was a response to anti-Black racism and has circulated to various parts of the world, including Vancouver.

Having attended the launch of BLM in March, 2016, Gyamfi’s desire to give back to her community prompted her to instantly reach out and become a par. Since then, she has planned  events for BLM which run in solidarity with black communities across the world, support black communities here in B.C. and lift up black queer and trans people, and for GNH.

Taylor said her humble and tactful presence while volunteering at GNH in the summer of 2016 probed him to hire Gyamfi as GNH’s Young Ideas Program Assistant, a position formulated specifically for Joy.

In an email, the Young Ideas program coordinator Jim Balakshin said, “Joy is a thoughtful, conscientious, and enthusiastic contributor at GNH, and [he enjoys] the time that [he gets] to work alongside her to support programs for the west end community.”

Gyamfi devotes Tuesday and Thursday evenings to connecting young Vancouverites through GNH’s low cost communal events, and she said she loves every minute.

“It’s really nice to be able to say that the purpose of my job is to build community and to foster new relationships,” Gyamfi said.

“I’m really glad I got through [the hardships]. I’m in university, working in a job I love, volunteering with a group that shares my passions; when I was younger, I could not have possibly imagined doing all of these things,” Gyamfi said.

A poem written by Gyamfi will be featured in The Garden Statuary 6.2 Print Edition, which will be released at the book’s launch party held in UBC’s Irving K. Barber Library on April 5. Gyamfi will also be performing a song she wrote at the event.