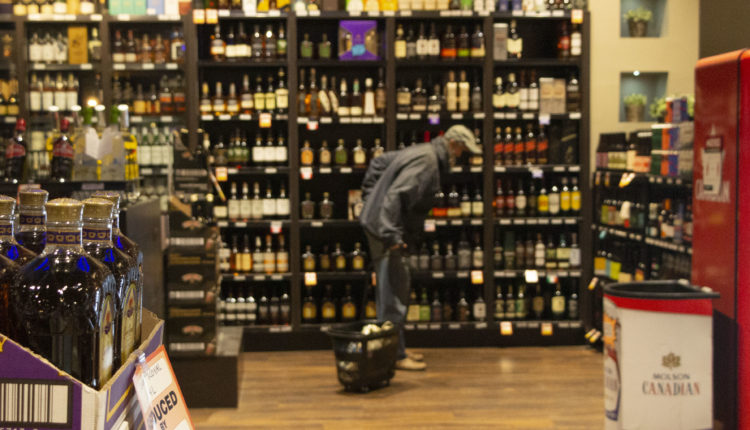 A customer browses the Marine Gateway Liquor Store in South Vancouver, which anticipates having some product shortages in the coming weeks. Photo: Claire A. Wilson

Specialty alcohol products may be hard to come by in B.C.

As Vancouver nears its busiest time of year for liquor sales, drinks like Baileys, Guinness beer, and champagne could face supply shortages

Dry January is coming early this year as Vancouver experiences liquor shortages as a result of recent floods.

With supply chain issues worsening, many bars and liquor stores will see certain products missing from shelves as the liquor market struggles to meet demand this holiday season.

According to Chris Funnell, B.C. wine sales manager for the alcohol distributor Southern Glazer’s Wine and Spirits, shortages began occurring at the beginning of 2021 due to rises in consumption during the pandemic. Those shortages will continue until the end of the year and likely worsen as liquor sales increase during the holidays.

“With most companies, about half of all liquor sold from their portfolios is sold during what is classified as the windy season or the last quarter of the year,” Funnell said. “So now a lot of those stores may be at risk of not achieving those sales and not being able to deliver it to consumers.”

Global demand for liquor has been continually rising over the past two years with shipping availability remaining the same. Funnell said this has caused a gap in the liquor industry between supply and demand. B.C.’s current state of emergency has further worsened the issue as floods cut off ground transportation networks throughout the province.

Local bars and pubs are feeling the effects with specific products missing from their menus. Abigail Brown, manager at The Library Square Pub, said that they have been experiencing shortages of Guinness beer.

“I’ve tried to order each week and we haven’t gotten anything or heard from anyone about it,” Brown said. “I know like all the Irish pubs are getting them first.”

Funnell attributed the shortage to a lack of shipping containers available in Ireland.

“So earlier this year, there were simply no new orders leaving Ireland,” he said.

Products like Baileys and Guinness will be hard to come by as they remain popular picks during the holidays.

Those looking for higher-end drink options will also have a hard time finding notable holiday favourites. Champagne and certain other wine products are experiencing a global issue in supply as their demand has soared since the start of the COVID-19 pandemic.

“During the pandemic, people can’t go into restaurants because the restaurants were closed, so they ended up spending more money to buy higher-end wine,” Funnell said. “And so the reserve stocks of champagne were greatly depleted.”

An uncertain future for stock

Stocks are at a relatively normal level in liquor stores for the moment. According to Tim Heslet, general manager at Marine Gateway Liquor Store, it’s the near future he is worried about.

“Whatever the warehouses have currently is what we’re kinda getting,” Heslet said. “Like for them to restock, that’s delayed. We’re not seeing it yet. But eventually, in like a couple of weeks here, we’re gonna be seeing that the warehouse is out of stock itself.”

For liquor stores like Marine Gateway, shortages of product will compete with their busiest time of year.

“I’m curious to see what’s going to happen and how consumer shopping choices might change during the season,” Funnell said. “They’re gonna have to look for alternatives because their usual can of Guinness or bottle of Baileys may not be on the shelf.”

Watch the interview clip below to hear Chris Funnell explain some of the details behind the alcohol shortage:

Beginner tattooists on the rise during the pandemic