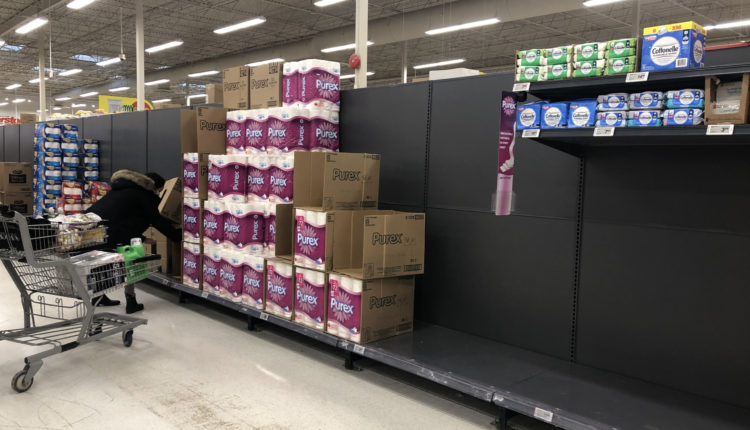 Customer at Superstore digging for the last rolls of toilet paper amidst a wall of empty product. Photo: Ashley Burgoyne

Floods have caused grocery shortages and restrictions on vehicle fuel

Short supplies have led to short tempers, according to essential store workers in Vancouver.

Floods across the Lower Mainland have caused grocery supply shortages and restrictions on vehicle fuel. Grocery stores in Vancouver have been having trouble keeping their shelves fully stocked, leading to angry, abusive customers sometimes taking out their frustrations on staff.

Superstore employee Rabia Klair works at the Southeast Marine Drive and Prince Edward Street store, packing online orders. Klair said customers are coming every day and wondering why shelves are empty, then asking when shelves will be stocked.

“Customers are very grumpy,” she said.

Klair said when items aren’t available, she has to order more.

Parul Sharma, an employee at a Chevron station on Main Street and East 41st Avenue, said customers are not happy about the provincial restriction that limits fuel for non-essential vehicles to 30 litres per trip to gas station. The restriction is to ensure vehicles that deliver essential goods and services can get fuel.

“Some people will just come in and then just yell at us,” she said.

Before fuel restrictions were put in place, customers were buying large amounts of fuel.

“Everyone was like buying like two hundred, three hundred dollars [of] gas,” Sharma said. “But they need to make sure, you know, the person behind them as well is getting something so this should be more considerate about others.”

Sahib Kohli, who works at family-owned grocery store Day To Day Express Grocery & Produce on Fraser Street and East 46th Avenue, said the floods have affected their supply of milk and rice.

“There was some days last week people were panicking,” Kohli said. “They were just picking up milk from all over the places.”

He said he’d heard of shortages at Superstore, Costco and private grocery stores.

Kohli said these larger stores receive supplies first, before smaller stores, and they are doing their best to keep products stocked.

More heavy rainfall is predicted to make its way through coastal and southern B.C. through today and Wednesday. This would be the third atmospheric river to hit B.C. this month.

She said her mother works at a smaller grocery store and says the supplies are coming in from other places such as Washington state.

Pow said there is no need to panic because of these alternative routes.

“We will run out of stuff, but we can just get it from other places,” she said.

She said the people panic buying need to be aware of those who can’t afford to stock up early, and that panic buying is counterproductive.

Sharma said the gas station she works at ran out of fuel only once, and more fuel was delivered less than a day and a half later.

“Everything is pretty OK now because we’re getting fuel deliveries, so for now I think everything is kind of back to normal,” she said.