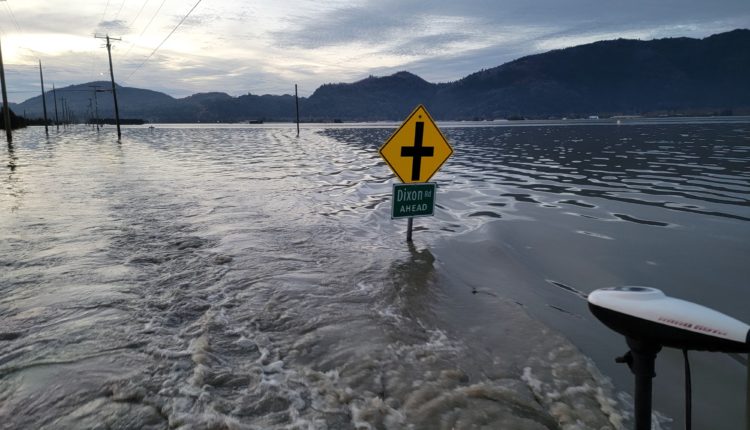 As Abbotsford deals with floods, one winery owner said it will take another five years before new plants can produce a new yield. Courtesy: Caroline Mosterman

Successive rounds of storms continue to hit B.C. with continuous rain leaving landslides, floods and damaged infrastructure in their wake.

Environment Canada warned of the likelihood of further flash flooding, especially in low lying areas, in its Nov. 30 weather statement. The region’s third atmospheric river hit the south coast with continuous rain, at times heavy, which is expected to persist through midweek as an upper-cold front moves across the province.

While the Lower Mainland braces for more weather, Abbotsford-based Ripples Estate Winery was one of the businesses affected by flooding in the area, leaving the establishment’s owner, Caroline Mosterman, devastated.

“It takes about five years, from planting before you could get a crop off the land,” Mosterman said. “Effectively, [the flood] has wiped out our farm.”

Mosterman added that it would take another five years before the winery can benefit from a new yield of crops.

According to Environment Canada, Metro Vancouver can expect up to 80 millimeters of rain, ranging up to 120mm for the north shore area as of Nov. 30.

Langara locals were asked about how the storms have affected them. One individual cited having a sinkhole in his backyard as a result of the continuous rain.

Mike Farnsworth, B.C. minister of public safety advised against any non-essential travel and to wait out the weather.

“With a third of the series of storms nearing, I want to urge British Columbians to pay close attention to Environment Canada forecasts and road closures,” Farnsworth said.

Watch the related video as Ripples Estate Winery owner, Caroline Mosterman speaks about how the atmospheric river has decimated her crops.

Specialty alcohol products may be hard to come by in B.C.