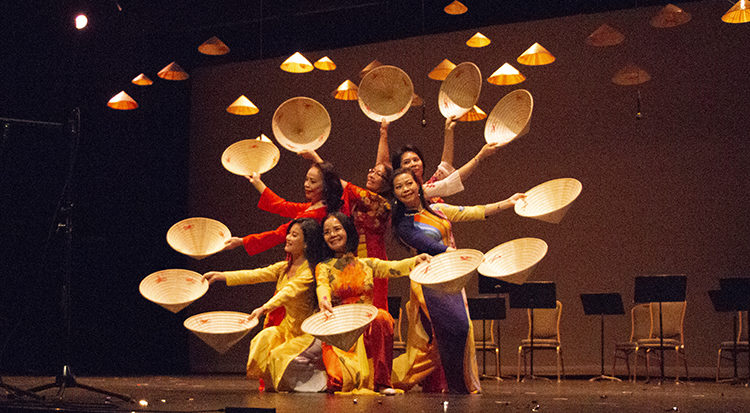 Performers at the Mai Đào event. Photo by: Nathan Gan

A southeast Asian cultural organization premiered a special concert last week at the Norman and Annette Rothstein Theatre, which showcased the experiences of Vietnamese-Canadians through a wide array of performance arts.

The show, called “Mai Đào: A Glimpse into Vietnamese Culture”, was created by the Southeast Asian Cultural Heritage Society (SEACHS) and displayed the historical roots of Vietnam through music, dance, and theatre.

A strong connection with one’s native country is very necessary, says renown Vietnamese actor and co-founder Thai-Hoa Le, as that connection will strengthen the individual’s confidence in their own multiculturalism amongst Canadian society.

“(The main goal of SEACHS is to) preserve, promote, and enhance southeast Asian culture,” says Le. When asked about the effects of events like this, he goes on to say “For some of us, it has contributed to a reconnection with our ancestry and a renewed pride.”

“We’ve got the past, the present, and we’ve got music from many countries,” says Dan Nguyen, who is part of the male a Capella group “The Bánh Mì Barbershop”. “I think this is a statement that the Vietnamese people in Vancouver are as diverse as any community.”

The event also served to abolish negative stereotypes, as the stigma from western civilization towards Vietnam is an important discussion throughout the event. This is evident from their acting segments on war and colonization by France and China, to their original tagline “What do we know about Vietnamese culture besides Phở?”

The Mai Đào event enticed both Vietnamese and non-Vietnamese people alike, as audience member Tina Meredith says that she hopes the show would expand her knowledge on cultures she was educated on before.

“When you look into it, the Asian regions differ immensely from each other. The least I can do, as a stranger to this culture, is get enlightened. And I can’t say no to a night of song and dance.”

Langara students board Lifebus to give back