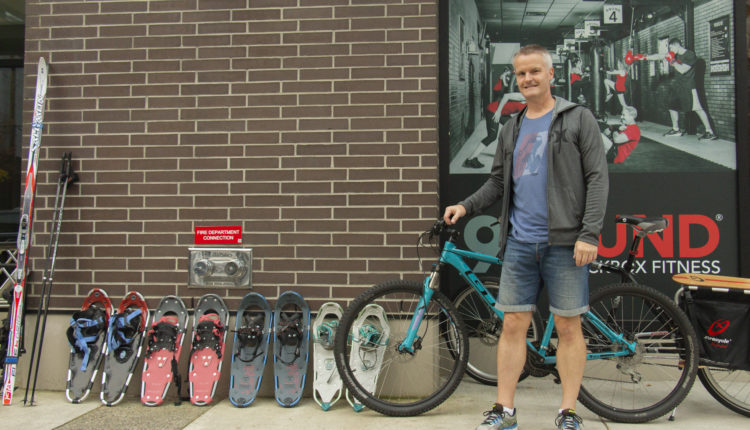 Paul Verlaan stands in front of bikes, snowshoes and cross-country skis that he lends through Quupe. Photo by Roxanne Egan-Elliott

A website that facilitates the sharing economy of goods gives young Vancouverites a chance to get active without the upfront costs.

Launched in February 2017, Quupe invites users to sign up for free and post photos of items they want to lend, or browse for items they’d like to use. Similar to Uber and Airbnb, all financial transactions take place through the website.

Erin O’Shaughnessy, Langara student, works at MEC and hasn’t used Quupe, but thinks it has the potential to remove barriers for young people to get outdoors.

“I have access to something like that through my work and I find that everyone that’s used it, they rave about it,” O’Shaughnessy said. “Having a place where you can access all that stuff for a cheap price gives the whole idea a lot more ease.”

Co-founder Angela Hamilton said that in winter months ski and snowboard gear tops the list of most popular items to borrow, and that the average borrower is a young urbanite who generally doesn’t have the storage space for outdoor gear.

Hopes for the sharing of sports equipment

Hamilton said that Quupe hopes to shift people’s ideas around access and ownership, in the same way companies like Spotify and Netflix have normalized accessing content over owning personal media libraries.

Hamilton also emphasized the importance of the community aspect of the site.

“The real love for people that engage with the platform is that moment of connection. I’ve found it myself when I use the platform,” said Hamilton, who has rented through the site a few times.

Paul Verlaan was one of the first lenders on the site. He’s lent a couple of bikes and snowshoes.

Verlaan said he had thought about the idea of getting together with his neighbours to share household items in an effort to confront “needless consumerism.”

Then he read about Quupe.

“These guys have figured out a really good way to do that,” Verlaan said.

Quupe received an innovation award earlier this year from the Recycling Council of British Columbia for its sustainability efforts.