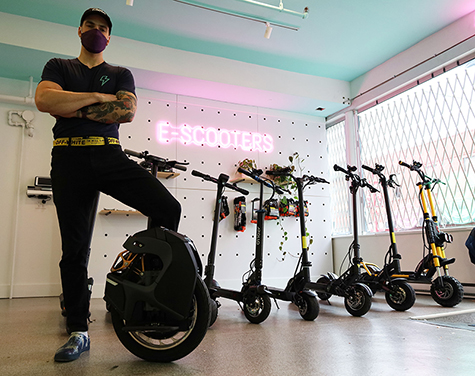 Lukas Tanasiuk stands on a unicycle in front of an e-scooter display at his shop in Vancouver. Photo by Lauren Vanderdeen

Despite 10 times the injury rate of bicycles, e-scooters are on the rise

This story has been updated to include information and background on ease of scooter use and safety.

Vancouver commuters are finding electric scooters a fun and easy way to move around the city, despite the safety risks.

In June, Vancouver city council temporarily approved the use of electric scooters on Vancouver bike lanes and side streets.

Marilene Alves, an immigration consultant, has been riding an e-scooter since 2019.

She rides the e-scooter from her Yaletown home to her work near Coal Harbour and uses it in her daily life like people use their bikes.

“It makes it easier for me to get from point A to point B,” she said. “If I need to go to work, I just put my high heels in a backpack and I just go.”

Catherine Winters bought an e-scooter to commute to her work at UBC. She occasionally uses a cane, and the e-scooter gives her more mobility.

Winters stressed the importance of riding safely. “These can go really fast,” she said. “It’s not a great experience if you wipe out.”

According to a city staff report for council, e-scooters have an injury rate just over 10 times that of bicycles and can be particularly dangerous for first-time users. For Alves, it took just 10 minutes to find her balance on her first ride.

“I’ve observed sort of reckless e-scooter types,” Fry said. “There are some, you know, kind of thrill-seeking types that get in the way of other people who are just trying to do their thing.”

Fry said neither the city nor the provincial government have done enough to create safe conditions for riders. “We have not created a sort of safe, dedicated infrastructure that is optimal for these devices,” he said. “We’re recognizing that high-speed electric vehicles, especially in shared capacities where they’re going alongside cyclists and slower-moving methods, does create a kind of a disruption and a noticeable danger.”

Kyle Mistry, a mechanic at the non-profit Our Community Bikes and longtime cyclist, isn’t concerned about riding alongside electric scooters. “I’m a fan of just anything that kind of gets you out of a car,” he said.

“There’s a lot of, I guess, newer, alternative, smaller-scale transportation coming together, which I think is great. Just kind of throw everything at the wall and see what sticks and hope it picks up.”

Eevee’s exceeded its most optimistic sales projections in its first six months. Tanasiuk said, “It’s been insane ever since day one.”

Shannon Brennan, senior communications specialist for the City of Vancouver, said the city is creating educational resources for the public. City staff will report on the e-scooter initiative in mid-2022.

Video of Catherine Winters who commutes to work with her e-scooter and stresses the importance of riding safely.