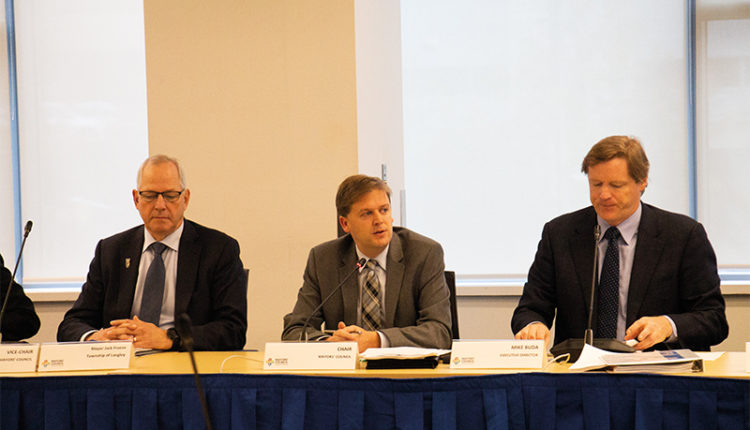 Students seek support from the council in locking down Broadway SkyTrain

Students need to have a voice in transportation decisions in the Lower Mainland, says one University of B.C. representative who is working with the new TransLink mayors’ council to ensure that.

“The [UBC student society] is working to connect with regional partners and the new mayors to ensure that all play a shared role in bringing this critical infrastructure to fruition and that students are included as stakeholders throughout the process,” said Cristina Ilnitchi, the vice-president of external affairs at UBC Alma Mater Society.

She spoke in favour of the new SkyTrain extension now being planned, which will run along Broadway from from VCC-Clark station to Arbutus Street on Vancouver’s west side.

Her comments came at an inaugural meeting where the new mayors’ council endorsed the TransLink board’s decision to suspend work on a light-rail line in Surrey, after the new council there voted to cancel the project. The mayors then voted to have staff start looking at the business case and planning needed for a SkyTrain line instead.

Different transit needs for students across the region

The decision will have implications for many students in the region, since a SkyTrain line in Surrey could make it easier for students south of the Fraser to get to Simon Fraser University and UBC. On the other hand, the light-rail line was meant to help connect the main neighbourhoods in Surrey and the loss of that line means students who go to university in that city, like Kwantlen Polytechnic University and the SFU Surrey campus, will mean no immediate transit improvements for them.

During the mayors’ council meeting, Richmond Mayor Malcolm Brodie stressed that the decision to halt construction on the Surrey light-rail line should not mean any changes to other projects.

“We also have to have a very clear indication that this discussion is not to affect any of the other components, like the Broadway subway is to go ahead,” he said.

Brodie was especially vocal about his concerns with Surrey’s decision. He said that a new council doesn’t mean old decisions can be undone, and that it hasn’t worked like that in the past – as his own council experienced when the Canada Line was built through the city’s downtown.

“[Richmond’s] city council wanted something at ground level, and TransLink didn’t come back and just flip the switch and say, ‘Okay we will go with the planning, design and procurement for a ground-level system,” he said.  “This approach is setting a very, very dangerous precedent.”

Debate among council members went back and forth during the almost four-hour meeting this past Thursday over Surrey’s decision. TransLink has spent about $50 million and Surrey has spent about $20 million so far on the project – money that won’t be seen again.

On the other hand, Surrey Mayor Doug McCallum said that the public doesn’t want LRT. He said there wasn’t thorough public consultation, and that’s why it makes sense for the board to revoke the original decision.

“There is no support in the city of Surrey for light rail. The only people that we do run into that support light rail is some of the business community,” he said.

Scottish dance teacher is seeing a decline in youth participation