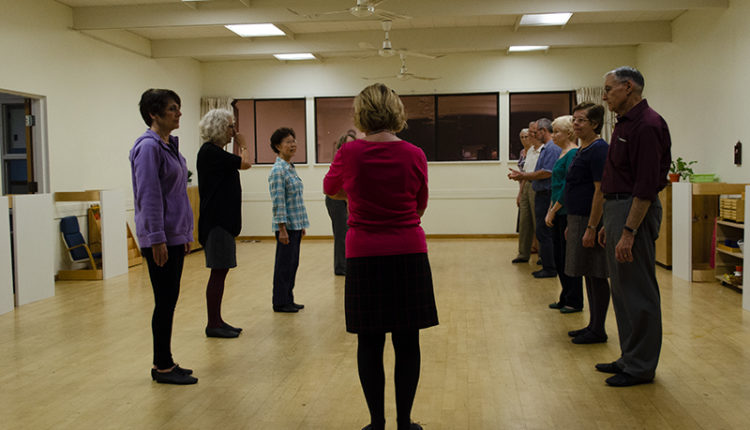 Scottish dance teacher is seeing a decline in youth participation

Kay Sutherland says younger people aren’t showing up to Scottish dance classes like they used to.

Sutherland teaches a class at the Scottish Cultural Centre in Marpole, and said that newcomers tend to like Scottish country dance because the dances do not require one set partner. She said people of all dance skills are welcome, but that younger people in Vancouver seem to be uninterested in participating.

Sutherland said there was a concern for increasing numbers nearly a hundred years ago as well, but since the revitalization through the 50s, 60s and 70s, popularity has expanded internationally.

“The numbers are going down gradually, but that’s true with any volunteer organization, unless

the organization is aimed at young people” said Stewart Cunningham, treasurer of the Royal Scottish Country Dance Society. Cunningham has been an active member of the society for 20 years.

Classes are held at the cultural centre on Wednesday evenings and prepares participants for upcoming social dances throughout the Lower Mainland.

The corresponding secretary for the society and active participant for 13 years, Gillian Beattie, said that attendance for the classes tends to fluctuate.

“You never know how many people are coming. We’ve had as few as three or four. We’ve also filled the room so you could hardly move,” Beattie said.

The centre will also host a Vancouver Ceilidh Dance on Nov. 30, which will be the last ceilidh dance of 2018. The casual ceilidh dances are important as they can introduce potential new members to the cultural centre and can help to recruit new members for the society.