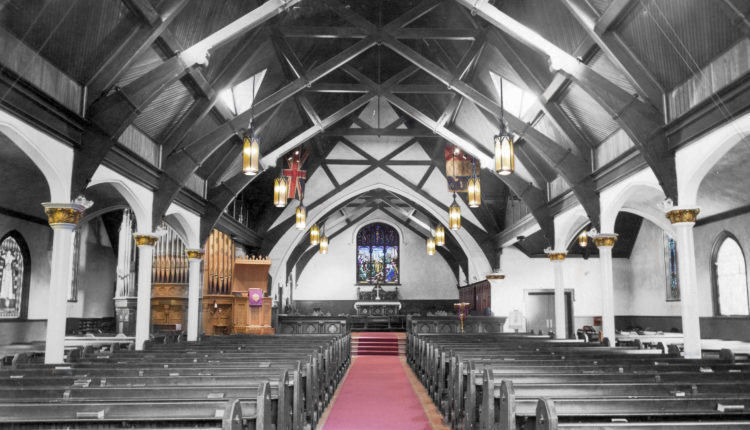 A digital composite from the exhibit. Photo by Kessa McGowan.

Langara students merge archival photos with ones from the present

A Langara photography project aimed at comparing Vancouver’s past and present is currently on display at the Vancouver Archives.

The exhibit, Merging Time, blends archival photos with present day shots of their geographical locations, showing changes that occurred over the decades.

“Photo classes from Langara had used the archives quite frequently,” said Heather Gordon, a city archivist. “Even before [this project] they would come and look at the photographic holdings that we have and it would often be part of their regular photo class.”

Gordon said the annual exhibit started over seven years ago, when Darren Bernaerdt, the department chair of the professional photography program at Langara, approached the archives when he had the idea of students in his Photoshop class using historical photos with present day ones.

“And then from there he suggested that it’d be an interesting exercise to actually have the students show their work in the gallery,” Gordon said.

Forgotten images get a second chance

Eric Stewart, an instructor in the program, said the purpose of the exhibit is to use images that might get forgotten otherwise.

“I think it’s an interesting way for people to engage with the Vancouver archives and those old images, most of those images just sit, no one ever looks at them,” he said.

Stewart took a photo of the Second Narrows Bridge for the exhibit, hoping to merge it with a archived shot of a boat striking the bridge. But upon trying to merge the photos, he found out that the original bridge had been torn down and reconstructed.

“The city’s done a bunch of rebuilding and tried to keep some of that old heritage which I think is interesting,” he said.

Kessa McGowan was one of the students who took part in the program. Her photo was of the inside of St. Paul’s Anglican Church located at 1130 Jervis St, which was initially built in 1889 to serve railway workers moving into Yaletown.

“I did take longer than the other students,” McGowan said. “I find creativity hard to rush, but if you have ideas ready ahead of time it makes it easier for sure.”

“Things have been around for a lot longer than we think or how we see them, and just being in downtown Vancouver, you don’t really think about it until you come across places like this,” she said.

Video: Recently retired journalist Allen Garr on how the industry has changed