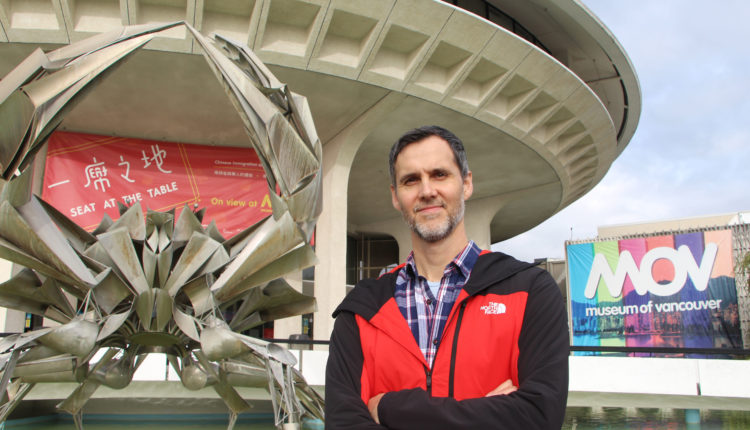 Chris Auchter posing in front of the crab at the Musuem of Vancouver. Photo by: Nicolette Colosimo

This story is an update to provide more detail about the characters in this short film.

Haida filmmaker Christopher Auchter created a unique take on an ancient Haida fable by focusing on a female protagonist whose story is told without dialogue.

Auchter read several traditional versions of the story Mountain of SGaana before adapting it into a short animated film. He is screening the film at a long-term exhibition Indigeneity Rising at the Museum of Vancouver. His first sculpture, Mouse Woman, is also on display.

In Auchter’s version of Mountain of SGaana, a young Haida fisherman is lost until he meets a feisty character named Mouse Woman who tells him a story that anchors him to Haida culture.

Mouse Woman spins the magical tale by knitting a blanket, and the story unfolds as the blanket gets longer with a colourful array of Haida designs and graphics that have meaning in oral tradition. As the story progresses, the designs change, relaying important events throughout the story.

Auchter wanted the female protagonist to be the heroine, so he altered the traditional story and made the woman dive into the spirit world to save the man she loves.

“I don’t think a Haida woman would sit around waiting for a Haida man to come rescue them,” Auchter said.

The protagonist was modelled after his grandmother, mother and aunts who have been strong figures in his life.

Auchter’s sister, Nikita Auchter, sings three Haida songs in the film. The heroine in the animation sings these songs to get herself out of trouble. She said she felt connected to the character and enjoyed digging deeper into her heritage through learning these songs.

“It is important to sing Haida songs because there are very few people in the world that speak Haida fluently,” she said.

The story unravels through the characters’ actions rather than dialogue. Christopher Auchter said the Haida language is rarely heard in daily life and the lack of dialogue in the video emphasizes its rarity.

The audience is everyone

Shirley Vercruysse, the National Film Board producer of the short film, said the lack of dialogue gives it a global reach. Since there are no language barriers, audiences around the world can discover Haida culture through the film.

“The Mountain of SGaana is such a beautiful exploration . . . The complexity and the richness of it allows for a sense of discovery, going on this journey with a very unique filmmaker, and this story that is so precious to him,” Vercruysse said.

Sharon Fortney, the curator of Indigenous collections at the Museum of Vancouver, said that the exhibit showcases the creativity and dynamism of Indigenous artists.

“It just really shows you the talent that exists today in these Indigenous communities,” Fortney said.

Auchter said when he sought the story out himself, it made him feel more powerful and grounded because Haida stories are still absent from everyday life.

“When you learn a new story, you pull your culture closer into you,” Auchter said. “You become closer to what it is to be Haida, so the stories aren’t lost.”

Here is a interview with Christopher Auchter: