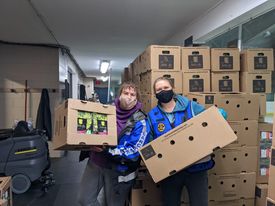 Josh Fletcher is a new Hope resident, having moved there in May. In less than a year, Fletcher has lived through forest fires, a heated vaccination debate and now major flooding. Fletcher said that the most recent of these events, however, has really allowed the community to set aside their differences in the face of a bigger problem.

“All that crap we had all been bickering about or being polarized, that went away very quickly. And then we were like, alright, so guys, we are Hopians we gotta get up in this. I mean, our local government, we did not hear from the mayor until day four…Google News says it was 1,100 [stranded] people but to us, it felt more like 1,500 to 2,000. All right, a lot of people here. We got to do some stuff. Because if we don’t do something, you know, people are really gonna struggle,” Fletcher said.

On Nov. 17, residents in the District of Hope came together to help just over a thousand strangers who were stranded by highway closures due to extreme flooding and mudslides.

As deep pools of water and mud washed away parts of Highways 1, 3 and 7, Hope became the nearest sanctuary for truckers, travellers and everyone in between looking for a safe place to stay.

Father Gordon Cook from Our Lady of Good Hope’s Catholic Church said the outpour of help from locals was immediate.

“Without hesitation, people [were] just coming out of their homes and helping people wherever they could. And that was really amazing. There was even a couple of pizza of places that started making pizza for strangers. Even the drugstore opened up with no electricity and helped people to get their medications and things like that,” Cook said.

But the community provided more than just pizza and places to sleep. They took care of people’s individual needs as well. Gordon recalls one story of a woman dependant on oxygen who had nowhere to plug in her oxygen tank during the power outages.

“All of a sudden, there’s a knock on her door, and it was to search and rescue people. And they came in and they knew about her oxygen situation, they took her to the [Hope Secondary] school. And she was able to plug in or oxygen machine because at the school, they had generators, because we still had no power. So they took care of her,” Cook said.

The help never let up either. Hope Secondary School opened at 2 a.m. on Nov. 15 to stranded people looking for shelter.

Justin Ray Arnesto, a music teacher at Hope Secondary School, attributes the selflessness of his neighbours to the closeness of the community.

“It’s a very small community, we don’t have that much, you can see how small it is. The school serviced 750 people during those five days. A lot of students and teachers came in and volunteered their time, they didn’t have to. Obviously, everyone pulled together,” Arnesto said.

Giving new meaning to being Canadian

It wasn’t just the people of Hope helping the stranded.

Fletcher tells the story of running into a new Canadian, a Sikh man from out of town that he met at a gas station on the first day of the flooding. The man had been helping deliver pancakes to all the stranded truck drivers in their rigs, which were too big to leave on the side of the highway.

“We had this beautiful moment, though, right? He was new to Canada but he was like, ‘this is what it means to be Canadian.’ I just looked at him as someone who’s born and raised from a very old family [in Canada] and I was like, ‘100 per cent, bro’ and we just like totally had a fist bump,” Fletcher said.

Vancouver businesses expect to be short on Christmas trees this year