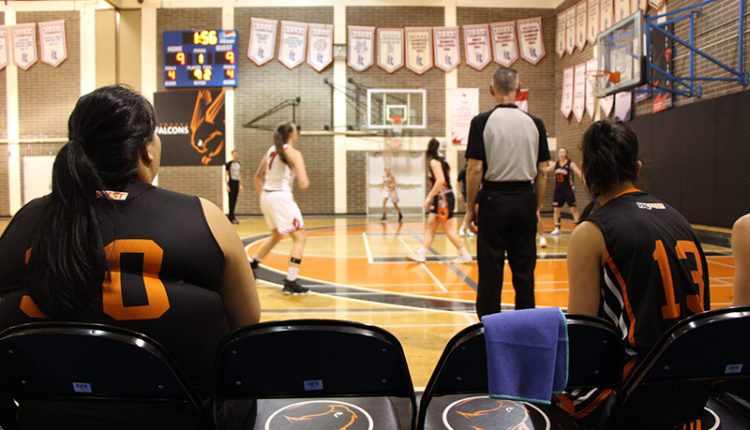 A view of the court from the Falcons bench. Photo by: Nathan Gan

Efforts outweigh results, according to the Langara Falcons women’s basketball team after a tough loss against the Okanagan Coyotes at Langara College last Saturday afternoon.

The two-point loss was hard-fought thanks to point guard Alexa Leynes with 21 game points and Stephanie von Riedemann who earned the most rebounds and assists with 9 and 5 points.

Leynes said that close games that end in losses mean much more to the integrity of her team than spiritless wins. She mentioned a previous game against Columbia Bible College, where the Langara Falcons were victorious with a score of 61 – 50, but Leynes felt personally that the team play was lacking.

“Today, we lost by two points, but it felt like a tie game. We worked so hard for it,” she said.

Third quarter push not enough for a win

The Langara Falcons served a weaker first quarter, scoring 11 points to the Okanagan Coyote’s 16 points. The team showed a resurgence after intermission, scoring 18 points in the third quarter.

Eloise Faehndrich, who is playing her third year for the Falcons, said the comeback is mainly due to their discussion during the game’s intermission. According to Faehndrich, the team often jokes that the third quarter tends to be the team’s weakest.

“The critical point is always coming out after our half-time talk, and I think we’ve been getting so much better every game at [overcoming weaker third quarters], so it’s nice to see that.”

Saturday’s game also marked the fourth match for PacWest with the Falcons’ new coach, Curtis Nelson. Nelson has two decades of coaching experience and was named the association’s Coach of the Year during Douglas College’s 2012-2013 season. Nelson said that significant growth towards consistent teamwork is integral and that numbers won’t shake them.

“Win or lose: that’s just a result. The process we’re in right now, I’m very pleased and happy with the girls, and I know that we’re going in the right direction.”