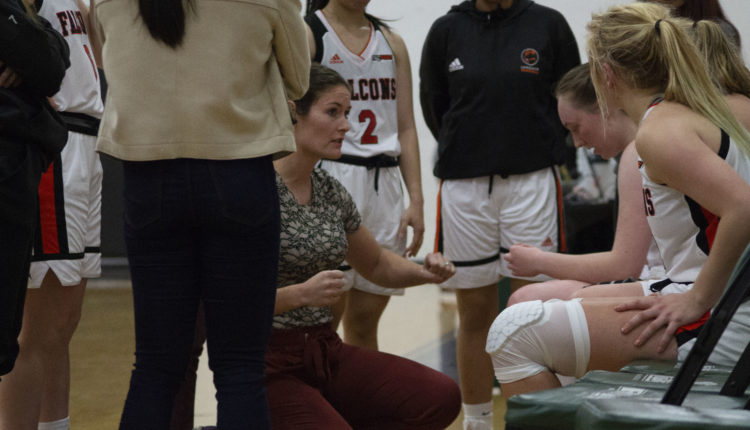 New head coach Virginia Watson talks strategy in the final quarter of the game against the Douglas Royals on Saturday. Photo by Kristen Holliday.

Women's team has their share of losses, while men's struggled to achieve a win

Langara’s basketball teams had a tumultuous week, with the women’s team losing two consecutive games — as well as their coach. Meanwhile, the men fared slightly better, defeating one of their top rivals and losing to another.

The women’s team lost to Capilano University on Nov. 8 and Douglas College on Nov. 9. They now have three losses and zero wins.

Emma Jones, a guard for the Langara Falcons, said she was frustrated with the game’s outcome.

“To lose a third one is kind of tough, when we have the potential and capabilities to play a lot better,” Jones said.

Curtis Nelson, the former women’s head coach, resigned in the week leading up to the Nov. 8 and Nov. 9 games. Virginia Watson was previously an assistant coach for the Falcons.

Watson said all three games were close and the women are focused on refining skills and maintaining control of the ball while on the offensive.

“They work harder than a lot of other teams,” she said. “If we can show that we don’t care about our previous three game losses and show that we can play just as hard, I think we are going to win a lot of games.”

The men’s team won against Capilano University on Nov. 8, but lost to Douglas College on Nov. 9.

“The more important test is going to be when we play [Douglas] again in January, when we’ve had a chance to get better,” Eberhardt said.

Eberhardt said with 11 new players, the Falcons were still continuing to build their team.

Falcons’ point guard Luka Lizdek said the team is feeling positive after the win against Capilano and is learning from the Douglas loss.

“We talked about communication all week and that’s where we showed in the second half,” Lizdek said. “If we can have two halves like that, we’ll be better next time.”