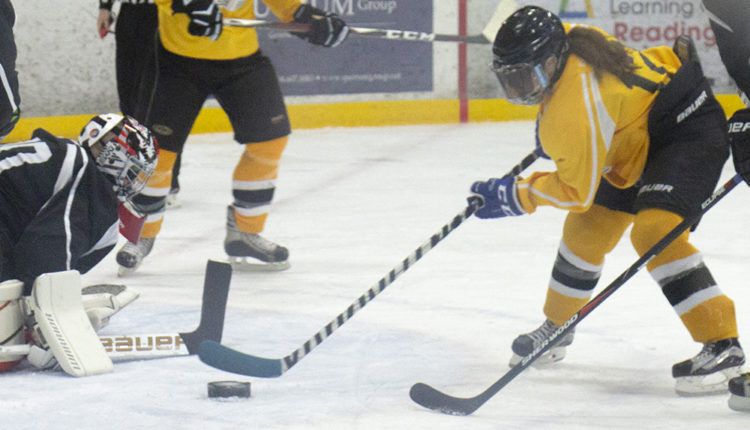 With some modifications to the game, visually impaired athletes say sport remains the same

Visually impaired hockey players from across Canada have come to Vancouver to play the sport they love.

The third annual Western Regional Blind Hockey Tournament began with a match between the Canucks and the Giants at the Bill Copeland Sports Centre. The Millionaires complete the round-robin event. Each team takes their name from a former or current Vancouver hockey team.

“We felt, let’s make three competitive, real good teams. And I feel we truly did that. There’s a lot of skill and talent on all three teams across the board. And that’s a huge testament to the sport growing,” said Luca DeMontis, the general manager of Team Canada. “Hockey is hockey.”

Modifications to the game

Blind hockey requires some modifications. The puck is 12 centimetres across and 5 centimetres tall, metal and full of ball bearings, which helps players hear it. The nets are 91 centimetres tall instead of 121 centimetres. And teams must complete at least one pass in the offensive end before being allowed to take a shot.

But don’t tell these players they don’t play hockey.

Mark Bentz, a director for Canadian Blind Hockey has played the game for the past 21 years.

“I walk around with my guide dog, right? And they’re like, that doesn’t make sense. How do you play hockey?” Bentz said.

A wide range of players

Bentz began playing blind hockey at 30. It’s important to him that people are aware they don’t need to know how to play, only that they want to learn.

“We have people from five to 80,” Bentz said. “If you want to engage, there’s a structure for us to get you out on the ice, teach you, and then get you up in hockey.”

The level of hockey is what Chris Munshaw, director of hockey operations with SFU, first noticed. The SFU men’s hockey team is aiding with practices during the tournament.

“We’re excited to be helping out. We like to raise awareness for blind hockey players and we’re really just blown away with the skill and the speed that’s on display here by some of these athletes,” Munshaw said.

And as for the Canucks and the Giants? Bragging rights belonged to the Canucks, winning the tournament’s first match 13-4.