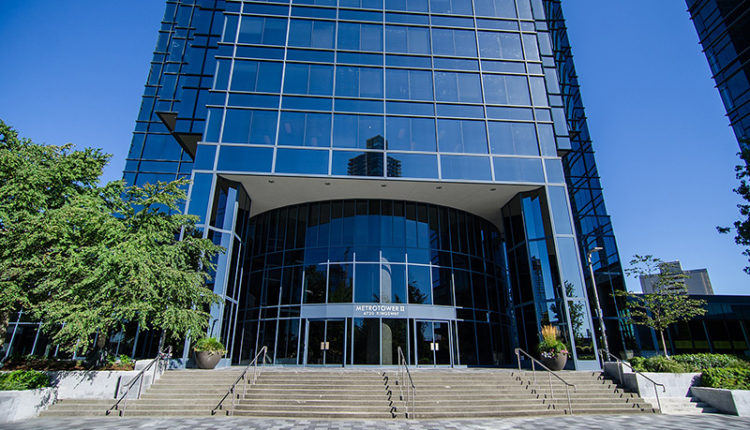 The location of the coroner's inquest into the death by suicide of Sgt. Pierre Lemaitre. Image via Wikimedia commons.

A coroner's inquest into the 2013 death of Pierre Lemaitre began Nov. 26

The RCMP sacrificed one of its own senior officers in order to shift focus from its role in the death of a Polish immigrant, a witness testified on Nov. 27 at the inquest into the suicide of Sergeant Pierre Lemaitre.

Atoya Montague, a former communications strategist for Canada’s national police force, testified about her working relationship with Pierre Lemaitre whose death was the subject of the coroner’s inquest.

“It was the single biggest institutional betrayal I’ve witnessed in my 15 years,” Montague said Tuesday at the inquest being held in Burnaby. She said on the witness stand that the RCMP “sacrificed” Lemaitre by not allowing him to correct inaccurate information, giving him a reputation as the force’s “spin doctor.”

Lemaitre was public face of the force after 2007 Taser death

Lemaitre was the media relations officer who acted as the RCMP spokesperson after four officers were involved in the taser death of Robert Dziekanski at Vancouver International Airport in 2007.

A coroner’s inquest into Lemaitre’s death began on Nov. 26. He died by suicide in July 2013 after battling clinical depression, anxiety and PTSD for the better part of a decade.

The coroner’s office is responsible for investigating unexpected deaths in the province and making recommendations to improve public safety.

Dziekanski died after being surrounded by four RCMP officers who were called to the International arrivals area after reports of an agitated man.

Dziekanski, who didn’t speak English, could not find his mother who had been waiting for hours for him in a different part of the arriv­als area. The RCMP officers shot Dziekanski multiple times with a Taser after thinking the man was wielding a weapon. It turned out to be a stapler.

Witness: Veteran officer set up to be a ‘scapegoat’

Lemaitre, who was the public face of the force as the RCMP’s spokes­man, reported details to the media immediately following Dziekanski’s death. Two days after his initial re­port, Lemaitre, a 28-year veteran of the force, found out there were ma­jor errors in the information he had relayed to the media.

“He ran into the [non-commis­sioned officer’s] office right away and told them they had to correct the information,” Montague said. “That was his number one focus.”

She said Lemaitre was told he could not correct the misinforma­tion. Montague wiped tears from her eyes during her testimony as she told the court how the RCMP used Lemaitre as a scapegoat to pro­tect the investigation. Lemaitre was transferred to the Langley detach­ment of the RCMP in 2008 and no longer given the high-profile job of speaking for the force.

In 2013, Montague launched a civil suit against Tim Shields, anoth­er high-profile media spokesman for the RCMP, the Attorney General of Canada and the Minister of Jus­tice in B.C., alleging sexual harass­ment during her time on the force. Shields was criminally charged with sexual assault in 2016 and acquitted in 2017.

The Nov. 27 proceedings began with testimonies from health-care pro­fessionals who said Lemaitre was a dedicated first-responder who suf­fered severe mental illness as a result of several traumatic events both on and off the job.

Clinical psychologist Georgia Nemetz, who does critical debrief­ings for several police forces after high-level incidents, diagnosed Le­maitre with PTSD in 2009.

Nemetz said more needs to be done by the RCMP to prepare offi­cers for their high-stress occupation.

“They should not expect their usu­al coping skills can protect them,” she said, adding that supervisors must have more training.

Another witness, Bill Dingwall, a retired RCMP officer who was recently elected the mayor of Pitt Meadows, testified that he investigated an allegation of a sexual misconduct claim between Lemaitre’s supervisor and a female reporter. The complaint was filed by Lemaitre whom the female reporter reached out to in 2003. Shortly after notifying upper management of the allegation, Lemaitre was transferred out of the communications unit. Following Dingwall’s human resources investigation, Lemaitre later received a formal apology.

Dingwall said he wasn’t aware of the severity of Lemaitre’s psycho­logical issues, but that support pro­grams were already well-established at that time for officers.

“Is there room to grow? Clearly there’s a difference of opinion on that,” Dingwall said.

In 2016, the federal govern­ment apologized and awarded a $100-million compensation package to a group of several hundred female Mounties who had suffered sexual misconduct on the job.

However, several women, like Montague, with claims against in­dividual officers still have cases out­standing.

The inquest continues through Nov. 29.