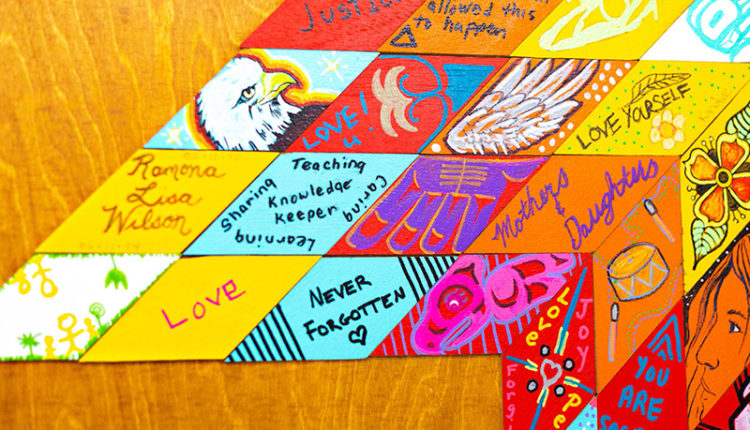 Wall art at the Saa-ust Centre in Vancouver reflecting on Canada's crisis of missing and murdered Indigenous women and girls. Photo by Kelsea Franzke

The first round of closing hearings in the controversial inquiry began Nov. 26

Unreliable and incomplete data suggesting that 3,000 Indigenous wom­en and girls have gone missing and been murdered across Canada is a gross underestimation, according to one advocate.

Chief Kupki7 Judy Wilson of the Neskonlith Band said the lives of women and girls have been ignored for decades and the time for talk­ing and apologies is over.

In her closing submissions at the National Inquiry into Missing and Murdered Indigenous Women and Girls on Nov. 26, Wilson said that there’s been a demand for years for action from the government and police to properly investigate the murders and disappearances.

Four days of closing submissions focusing on human rights, government services, rac­ism and polic­ing are being presented to the Com­missioners in Calgary. The hearings, which mark the beginning of the end of the In­quiry, run from Nov. 26 – 30.

In Vancouver the Saa’ust Centre, a community space that acts as a safe space for survivors and fami­lies, is live-streaming the submis­sions throughout the week.

Eric Anderson, office manager at the Saa’ust Centre, says that it is important to educate people on the issues that Indigenous people are facing across the nation.

“For non-Indigenous people, a lot are completely unaware of the issue, and you can no­tice it in the media. There are women and girls, as well as young boys and men, who are go­ing missing all the time, but it’s never covered by the media as heavily as it should be,” Anderson said.

“I think non-Indigenous people need to step up to the plate in scaling back on rac­ism and educating people on rac­ism, because that’s the root cause.”

Mikenze Jordan will be repre­senting the Aboriginal Women’s Action Network presenting sub­missions on Nov. 29. She wants the government to know that their actions and policies are harming women.

“I want to let the state know that colonialism and patriarchy are, in a literal sense and in many subtle ways, killing Indigenous women. It needs to stop,” Jordan said. “I know that we have many Indig­enous women warriors who are listening out there, and I hope that they continue to fight and use their voices.”