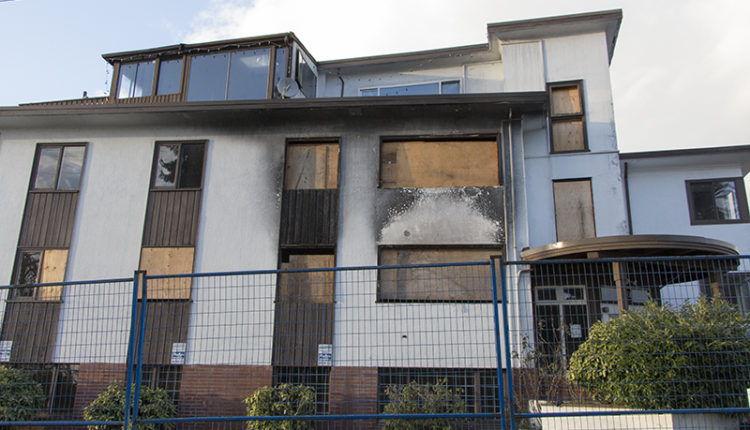 A development plan for 2601 Lonsdale Ave., a site gutted by fire last year, has residents in the area rallying against a public hearing. Photo by Myra Dionne

Residents say a public hearing will not change current plans

Residents opposed to a proposed six-storey 44-unit development on an Upper Lonsdale building site gutted by fire over a year ago are worried their concerns will not be resolved at a public hearing.

The City of North Vancouver city council will vote March 12 on a motion to move Pezzente Holdings Inc.’s application to rezone 2601 Lonsdale Ave. to a public hearing.

Marilyn Biddle and several residents in the area say their concerns have not been addressed, despite signing petitions requesting the city and developer consider modifying the proposal.

“It’s really difficult because I’ve lived here a long time and I’ve seen the highway come along,” said Biddle, who is concerned about the building’s height and effect on parking and traffic. “We used to be able to park on Lonsdale then, you wouldn’t dare park on Lonsdale now.”

Biddle said if the city chooses to close 26th Street West — a laneway that gives residents access to the neighbourhood — traffic will be diverted to 27th Street, alongside a school and increase congestion.

The closure would also destroy the neighbourhood’s current green space, which is owned by the city but maintained by residents.

Council voted 3-2 at a Feb. 5 meeting to send the proposal back to staff for changes, instead of moving it to a public hearing. Two councillors were absent for the vote.

That prompted Mayor Darrell Mussatto to use a subsection of the community charter and council procedure bylaw to bring back the item for a second vote next week.

“Since there were a couple people missing from the meeting, I wanted to have it reconsidered,” said Mussatto, noting the urgency to get the development moving because the site is in a derelict state. “[The developer’s] insurers are wanting him to make a decision, they want to do it within a year, so they’ve been sitting on this for a year. He wants to make a decision sooner, so he doesn’t lose his insurance. That’s what the bit about urgency is.”

Alfonso Pezzente, the applicant of the project, said he’s complied with every change city staff requested, including closing the laneway. He said he also adhered to the Official Community Plan, which designates where the city wants density.

If his proposal is rejected, he added, he will have to rebuild the existing structure on the site, which was gutted by fire in February 2017.

“I don’t have any options,” Pezzente said. “I can’t fight city hall and the neighbours for the next two or three years. I’m just not going to do that. It’s a financial and an emotional stress. I told them right from the beginning, I didn’t want to be the bad guy against the neighbours.”

Change could come from city staff

The proposal includes plans for a new green space, which would save an old cedar tree. But Pezzente said having both the laneway and the green space is not possible.

Jodi Waring, a community member who has rallied residents to fight the project, said many people feel a public hearing would only benefit the developer. Waring said having it go back to staff allows for more opportunity to see the change residents want.

“It’s just frustrating that the city doesn’t seem to listen to the actual residents, they obviously listen to the developers who have more money or influence,” said Waring, suggesting some councillors tend to vote more pro-development than others, including the mayor.

Campaign disclosure statements filed with Elections BC indicate Mussatto received a $1,000 contribution from Pezzente in the last election campaign.