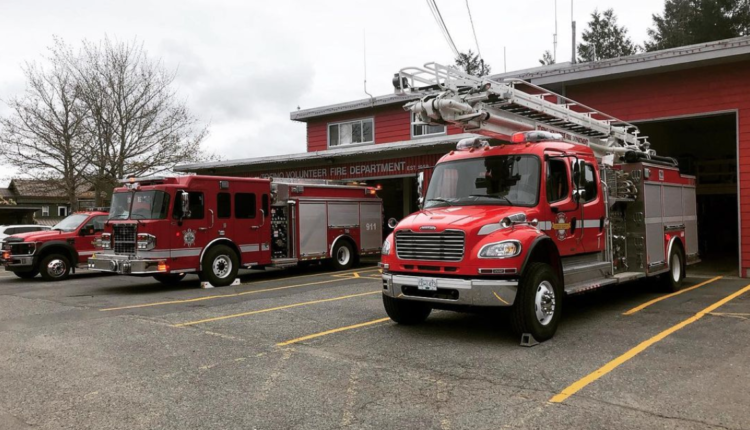 The Tofino fire station in an undated photo. Photo: District of Tofino.

The proposal is part of a growing trend to keep B.C. fire stations staffed

The days of unpaid mandatory on-call shifts may be coming to an end for the Tofino volunteer fire department.

During a city council meeting held Oct. 12, fire chief Brent Baker recommended changes to the fire and life safety bylaw, which has not been updated since 2004.

Among those changes is a proposed $450 per weekend honorarium paid to volunteer firefighters for on-call weekends during holidays and peak summer months.

Currently, each officer is required to commit to seven weekends per year where they must be ready and willing to work between Friday night and Monday morning, totalling 62 hours.

This creates a hardship, said Baker, as many members of his team have jobs outside of the fire department.

“Not very many people can turn down paid work to be on call on a volunteer basis for 62 hours straight,” said Baker, who would like to ease the financial burden for staff, many of whom work in the tourism industry. “By providing guaranteed wage, they can make that financial decision for themselves to sign up and be committed to that and not necessarily feel like maybe they have to pick up an extra shift at their place of employment.”

The proposed honorarium would equate to an hourly wage of $7.26 for on-call staff and cost the city nearly $19,000 annually, an amount that would be coming from property taxes.

“Frankly I believe that our community is getting a bargain for the level of service the Tofino volunteer fire department delivers,” said Stere during the meeting.

If approved, Tofino will not be alone in shifting its pay structure to meet the needs of its volunteer fire fighters.

Across the province, many fire departments are looking for ways to keep their stations staffed.

In a blog post by fire chief Vince Mackenzie of Grand Falls-Windsor, N.L., a census conducted earlier this year by the Canadian Association of Fire Chiefs counted about 100,000 volunteer firefighters across Canada.

That is a noted decline from 126,000 volunteers in 2016, from a census conducted by the National Fire Protection Association.

Fire chief Dustin Curry, of Tumbler Ridge, B.C., said that about 70 per cent of firefighters in the province are volunteers and many have careers outside of emergency response.

Curry was an auto mechanic before joining the fire department 16 years ago. Eventually his work caught the attention of the fire chief, who encouraged him to become a volunteer.

Within the Tumbler Ridge volunteer fire department, many of its members work in coal, oil and gas, and wind farming. The department also created a flexible schedule that allows stay-at-home parents to volunteer while their children are at school.

“I would definitely say that [Baker] is following a trend that we’re seeing, not just in B.C., but across the country in terms of recruitment and retention and coming up with new ideas and strategies in order to try and secure those valuable tools, which is our personnel, to maintain our service levels,” said Curry.

For Curry and Baker, both living in small towns with roughly the same population, making life a little easier for their volunteers is important.

“They’re trying to manage their own lives. They don’t necessarily have the free time that they used to. Everybody’s just gotten so much busier in the last few years managing their businesses. But also, things have changed quite substantially with COVID,” said Baker, who said that some of his volunteers now spend their weekends covering staff shortages due to the pandemic.

The motion to update the bylaw with the proposed wage structure moves on to the budget council. If passed, it will be enacted in 2022.

Listen to the interview with fire chief Brent Baker as he describes some of the difficulties his team faces choosing between their main jobs and volunteer work.