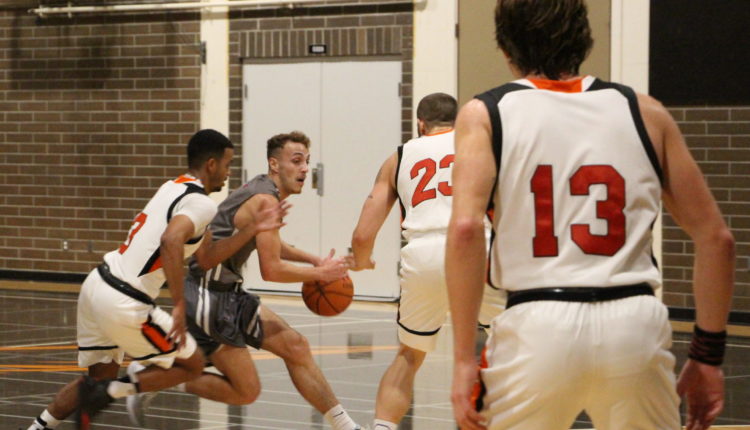 While the men's team recovers from a tough loss in their PACWEST opener, the women have some catching up to do

This story is a follow up on the PACWEST basketball season

In their return to competition after the pandemic hiatus, the Langara men’s basketball team rallied from an opening-match loss to win their next two games on home court against Douglas College last week.

Langara’s women, meanwhile, will try to recover from their three-game losing streak.

Rallying from a season-opening defeat at the hands of Capilano University, Langara’s men defeated the Douglas College Royals 97-85 on Nov. 6, a day after winning an intense 89-84 battle.

Men’s coach Paul Eberhardt said he thinks the men can challenge for one of the top two spots in the league.

“We dominated the boards and as I tell the guys, if we do that we’re gonna win most games,” Eberhardt said, though remained cautious. “We have so many new [players]. I just have to remind myself to be patient.”

The women also got off to a tough start with a season-opening loss against Capilano University, but were unable to recover, suffering a 71-62 loss to Douglas College on Nov. 5 and an even more lopsided 82-47 defeat the next day.

Women’s coach Virginia Watson said she hopes the women can take the steps necessary to reach the playoffs and the Canadian Collegiate Athletic Association Championships.

“I do expect us to continue to improve throughout the year,” she said. “So whether or not we are nationals-ready yet, hopefully by the end of the year we will be.”

Highlights from the game

In the men’s last game, Douglas took the lead with four minutes remaining  in the last quarter until Jas Dhudwal made a free throw and tied at 81-81.

With less than three minutes remaining in the game, Saleem Ali-Musa’s layup gave Langara a two-point advantage, a lead the home team was able to build upon to eventually win by 12 points.

The day before, Falcons guards Royce Sargaent and AJ Chahal had 17 points apiece, and guard Nic

In the women’s last match, Douglas College jumped to a 26-14 advantage in the opening quarter, and Langara’s women were never able to catch up.

The games marked the first PACWEST action for the Falcons since the 2019-20 season, before competition was cancelled due to the pandemic.

Footage from Nov. 5 game between the Langara Falcons and Douglas Royals