Time to let the dogs in

Including therapy dogs into the Service Dog and Guide Dog Act, which is now only limited to service or guide dogs for people with physical disabilities, would make them more accessible for those who need the emotional support they can get from these canines.

Vancouver ecoVillage Society has submitted a request to several Greater Vancouver municipalities requesting that certified therapy dogs be included in the provincial legislation which gives these animals the right to use public spaces, such as transit.

William Thornton, CEO and co-founder of British Columbia Guide Dog Services, said that in many European countries, dogs are allowed in places where they can’t go in B.C. municipalities. In Switzerland, for example, Thornton said dogs are permitted to ride in high speed trains.

“We don’t need to go into restaurants and supermarkets like service dogs,” Kaddon said. “We just need certain public things open to us.” 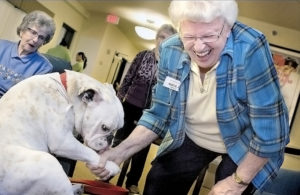 Kaddon said dog handlers being able to use public transportation with their therapy dogs will make life easier for them and will therefore make the therapy dogs more accessible to those who use the services of the society which trains therapy dogs for people, like seniors, who need emotional support.

If therapy dogs were included in the Service Dog and Guide Dog Act, the cost to license them would be removed, according to the staff report by the City of North Vancouver’s bylaw office.

Megan McKinnon, a Delta therapy dog owner, said the fee is prohibitive to some.

“The fee currently is around $100, which I think could be lowered,” McKinnon said.

Therapy dogs will be available for students at Langara College on Tuesday, Dec. 5 for De-Stress Week from 11 a.m. – 1 p.m. in the Langara Students’ Union building.