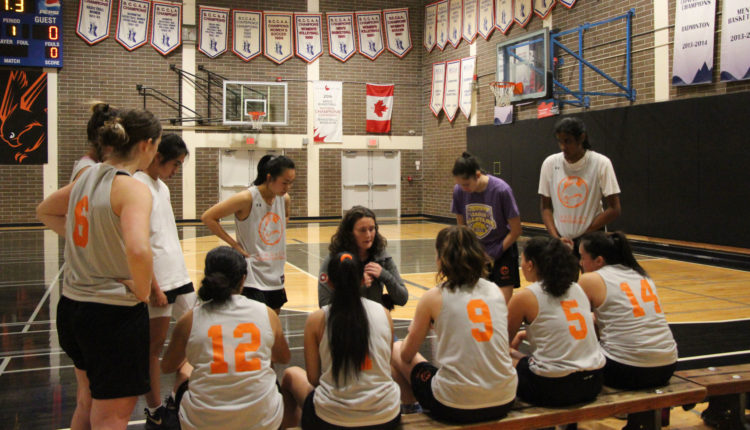 Falcons Women’s Basketball team catch their breath during a training session with their coach. Photo by Lesia Pogorelo

The Langara Falcons basketball teams prepare for a return to competition

Falcons aim to start season on the front foot

This story has been updated to include quotes from Jas Dhudwal and Janna Jamorabon.

After almost two years without facing any opponents, the Falcons women’s and men’s basketball teams are brushing off the dust and gearing up for a return to the competitive court this month.

Having trained with mostly zero contact and in smaller numbers, the team is trying to get back to its good habits — and winning ways.

Jake McCallum, Langara’s director of athletics and intramurals, said during the pandemic, athletes had been training with no contact and in smaller numbers though as they moved through varying levels of restriction, they were on occasion able to train with contact.

“I am glad that the COVID pause hasn’t affected any of the ability for coaches to attract student athletes,” McCallum said. “Our coaches are recruiting and assessing talents 365 days a year.”

Since competition was suspended in the middle of October last year due to COVID, the teams have focused on training.

“Since the second week of September, players work hard and do training every day,” said the men’s basketball team coach, Paul Eberhardt. “When we scrummaged recently, the guys were so excited – for some of them was 20 months since the last time they played.”

The men’s team has been almost completely overhauled since they last competed, with only two players left from the previous competitive season in 2019-2020, Ronan Reid and Jas Dhudwal.

There are a total of six players returning from last year, when the players trained but saw no competition due to COVID.

Dhudwal, a third-year Kinesiology student, expressed feeling exhaustion in the earlier days of the team’s return to training, but now feels energized despite dealing with the stress of classes combined with training.

“I enjoy practising and being able to play,” Dhudwal said.

During the 2019-20 season, both the men’s and women’s basketball teams made it to the quarterfinals before being eliminated from the PACWEST Basketball Championships.

According to Virginia Watson, coach of the women’s basketball squad, the team became close-knit through their training, which has consisted of going on hikes and bike rides.

Janna Jamorabon a first-year student in the Design Formation program, has been playing with the women’s team since 2019. Jamorabon says the team spends two hours running through drills and game plans daily, and she believes they are in good shape in the final days before the start of the season.

“The team is looking good. We are a young team,” she said.

The women’s team hasn’t seen much change, but that doesn’t change the level of effort needed to win this season, said coach Watson who has noticed the team’s dynamics gradually develop.

She said the team is heading into its first game against Capilano this week with confidence.

Despite the team having ample training sessions so far, Jamorabon is eager for the team to have more game-time to assess how much work there’s still left to do.

“Game-time is the best way to gain more experience.”

The 2021-22 season starts with the Falcons at Langara gymnasium on Oct. 29, facing the Capilano Blues. The women will be playing at 6 p.m., and the men’s team starting at 8 p.m.