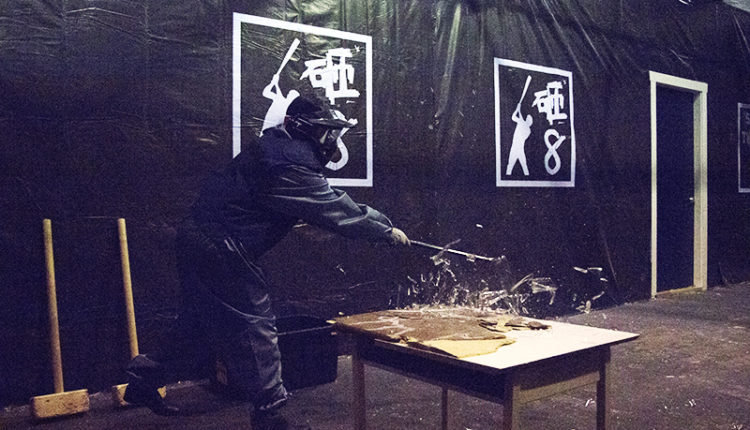 Recreational facilities that allow people to smash items are becoming a popular past-time when it comes to de-stressing and socializing.

Deyar Asmaro, a psychology instructor at Langara, says that when people are under a lot of stress, they will sometimes seek an outlet for it. Asmaro says it is the idea of catharsis which is used in psychology to explain the process of releasing strong or repressed emotions. Catharsis comes from the Greek word kathairein, meaning ‘to cleanse.’

The key to inner peace is a crowbar

“It seems to me that these smash rooms are a way for people to practice catharsis [to] get rid of tensed up stress in a form of aggression,” Asmaro said.

Asmaro also says that smash rooms are a bonding experience for people to go out and do novel things together and that there’s been research that shows it actually sustain relationships.

“They can seek satisfaction levels by it – including people who are married,” Asmaro said.

In Canada, recreational facilities are popping up that allow individuals and groups to smash glass, ceramic, chinaware, electronics or their own items in protective gear in a designated room. Some of these facilities include Battle Sports in Toronto, the first to open in Canada, and Smash Therapy in Richmond, the latest and only one in Lower Mainland.

Steve Shew, co-founder of Battle Sports, says he predicted smash rooms would be particularly popular in Toronto because there is a high number of law firms and headquarters in the city.

“Rage room was kind of that mixture between the novel experience plus the ability to let out some stress,” Shew said.

Robbie Luo, co-founder of Smash Therapy says that people come for a combination of stress relief, and for the ability to release their inhibitions and break things.

“We do have people who come here to relieve stress,” Luo said. “The most common I would say right now is people who just want to come and try something new.”

On weekends, Smash Therapy can see 20 to 30 patrons a day, said Luo. Given the popularity of the Richmond location, he plans to open a second Smash Therapy in Burnaby in the future.