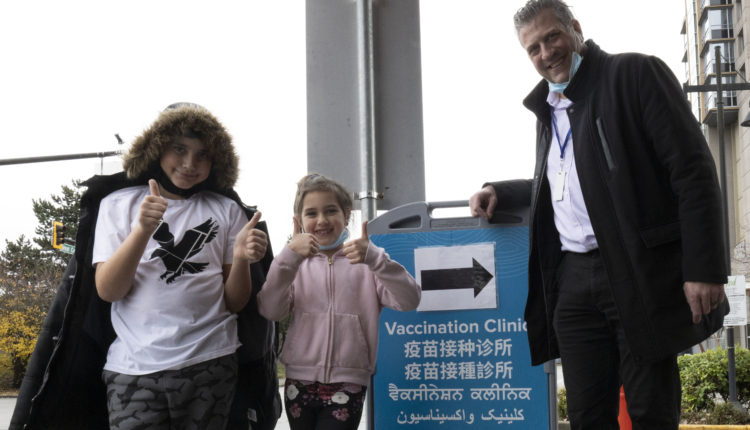 Mike, Izzy and Desi Sachs pose before the children get their COVID-19 vaccination at the River Rock Casino in Richmond, BC. Photo: Lauren Vanderdeen

'It's just a little prick'

Monday was a vaccine miracle for Mike Sachs of Richmond who took his children to the COVID-19 vaccination clinic at the River Rock Casino.

“This is a holiday for us,” Sachs said. “Today’s the first day of Hanukkah. Last night was the first night, but today is the first day. And for us to be able to get in on the first day, to get the kids vaccinated, we see it as a miracle, which is what Hanukkah stands for.”

His children, Izzy, 8, and Desi, 6, showed no fear before getting their shot.

“I’m excited to not be at school,” Izzy said.

Sachs said the family has been waiting for this day.

“We’re a family that believes in science and believes in following public health, so we’re trying to do our part to make it happen,” Sachs said.

Health Canada authorized the vaccine for children aged 5–11 on Nov. 19. Kids in Ontario were able to get their shot starting last Thursday. In Alberta, children’s vaccinations began on Friday.

Angela Chase said her family has seen the damages of COVID firsthand with family and friends.

Her daughter Gabby, 10, was excited to get the vaccine. “I wanted to be protected,” Gabby said. “I don’t like corona.”

After getting the shot, she sent a picture to her friends. “Didn’t even hurt,” she said.

Some parents were frustrated by the vaccine booking process. While the province has said to wait for a text message, many found it easier to just book by phone.

“Parents are just like, forget it. Like, we’ve been waiting,” said Candace Flannigan after her two children were vaccinated. “Other provinces were vaccinated days ago. We’ll call until we get our kids the shots,” Flannigan said.

Michael and Stephanie Wong also called to book appointments for their three kids. Immediately after they called, they received a text notification. Two hours later, they got an email notification.

“It was a bit of a mess. But that’s public health in this province,” said Michael Wong.

Despite the booking delays, Flannigan said she was relieved to get her children vaccinated. Her 11-year-old daughter Daphne said there was little pain involved. “It didn’t hurt that much actually, it hurt less than a flu shot.”

While the Wong parents were doing everything they could to book their children’s appointment, their son Alex said the shot was all over before he knew it.

“It was just a prick,” he said. The family’s only debate was whether the jab took one second, or one and a quarter seconds.

Alex’s sister Juliette admitted that even though she knew it was a good thing, she was scared just before getting the vaccine.

“My braveness won over my scaredness,” Juliette said.

A Richmond father of two expressed his gratitude for being able to get his children vaccinated on the first day.