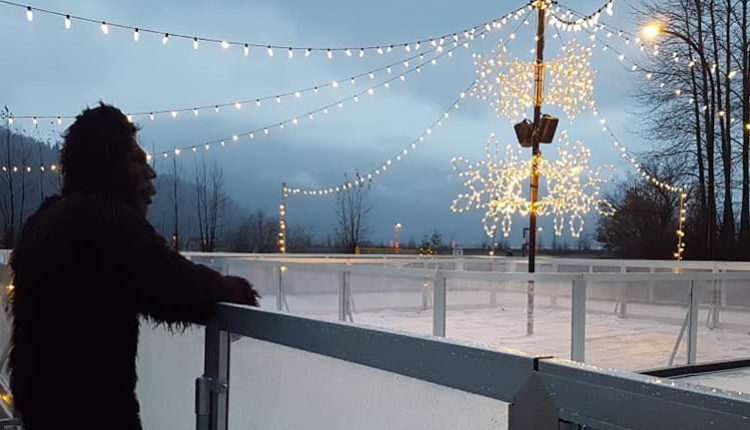 Harrison's well-known mascot the Sasquatch stands over the empty Starlight Skating Rink when it was opened in 2019. Photo: Deanna Fortin Jones.

For the second year in a row, the Starlight Skating Rink will remain closed due to the pandemic

Anticipation was met with disappointment for Harrison Hot Springs’ community skating rink after the village council announced that it won’t reopen.

First posted to Tourism Harrison’s Lights by the Lake website in late October and later released by the Resort Municipality of Harrison Hot Springs as a media statement on Nov. 1, the village formally announced that the rink won’t return for the 2021-2022 season. The media statement cited safety issues in regards to the COVID-19 pandemic, particularly the need to install fencing and hire additional staff.

“The Village does not have the capacity to manage the site to the degree required and did not have sufficient notice to secure a contractor to operate the facility,” the media statement said.

Harrison Hot Springs resident Callie Wilson is disappointed. Wilson and her family were looking forward to the rink’s reopening as she said it was one of Harrison Hot Springs’ only family activities. She said they loved to visit when the rink was opened in 2019.

“We were there at least once a week, if not twice a week. And my daughter learned how to skate there,” Wilson said.

Harrison Hot Springs is a village in the Fraser Valley situated at the southern end of Harrison Lake. As of 2016, its population is 1,468 but that number skyrockets every summer as the village is a tourism destination. The main tourist attraction is its lake access and natural hot springs, particularly at the Harrison Hot Springs resort.

The seasonal outdoor synthetic ice rink was opened in fall 2019. It was constructed in the village’s boat launch parking lot as a part of the Lights by the Lake tourist attraction. The free, unsupervised attraction included a track for skaters to circle around with their own ice skates or with rented ones from an accompanying rental shop.

In 2020, it was expanded to double the size but never opened. It was constructed but empty last year, and although this year it hasn’t been set up, it was announced to not reopen.

Michie Vidal, a Harrison Hot Springs village councillor, said it was due to the continued pandemic restrictions.

“Although outdoor activities are considered safer than indoor events, it would be difficult to monitor the numbers of individuals accessing the rink at any given time,” Vidal said.

Harrison Hot Springs resident Georgina Olafson never skated on the rink, but said she would walk around the village three times a day and loved witnessing the rink’s participants on her strolls. Although she has never tried it herself, she would recommend it to those who were interested.

“Looking at the lights, it’s really beautiful, and now you can play with the kids on the skating rink. I thought it was a perfect addition,” Olafson said. She is sad to hear it won’t return.

While Harrison Hot Springs has announced that the rink will not open this year, the village is anticipating the return of the rink in fall 2022. Olafson is hopeful that as restrictions loosen, there may be a chance for it to open sometime this winter.

“I’m thinking that they probably could have still scheduled it for December and then change their mind if COVID got stronger again,” Olafson said.

A year without the ice rink is a long time to wait for eager residents who were looking forward to using it. Wilson said her daughters were let down, as they had bought skates particularly for the rink the first year it opened.

“My girls were quite disappointed. And I’m actually thinking that because it’s been two years, I don’t even know if their ice skates we bought [will] even fit them anymore,” Wilson said.