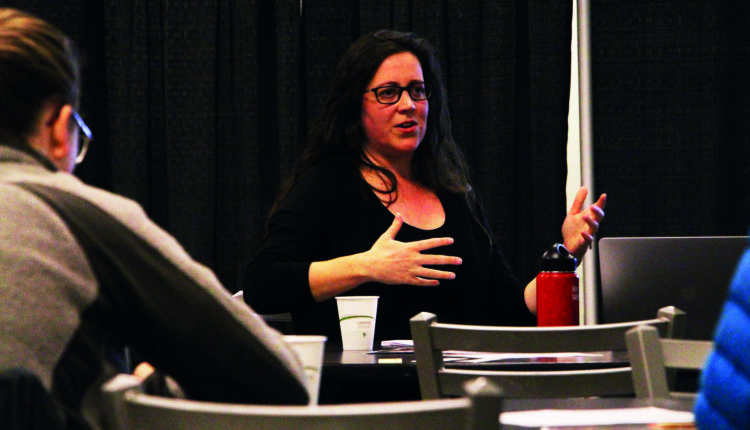 Dr Kelin Emmett speaking at the Philosphers' Jam on Thursday, where they discussed a historical view of marriage and feminisim. Photo by Palak Klaire.

Marriage as an illegitimate concept that was forced upon women by men to diminish their authority was the subject of a Langara philosophical forum Thursday.

Dr Kelin Emmett, an assistant professor at UBC, spoke on the nature of marriage at the Philosophers’ Jam forum on Thursday, sharing documents from her postdoctoral research about early modern women philosophers.

One of them was a writing called Giustizia delle donne by Modesta di Pozzo di Forzi (pen name Moderata Fonte), a 16th century Venician writer who wrote outside of the genre norms that were expected for women at the time.

In the literary dialogue that was published by her children after her death, Fonte writes about two groups of women who debate on the nature of men.

“The questions of what modern readers are to make of the dialogue invites further philosophical considerations of the dialogue’s most interesting passages, many of which quite lucidly portray women’s equality and the tyranny of men over them as an artificial and indefensible development,” Emmett said at the forum.

“Fonte’s treatment of marriage specifically indicates that it can be viewed as a political institution as opposed to a natural institution, and one that was degrading to women’s political, moral and economic agency.”

Emily McBrayan, a student who attended the forum, suggested that marriage could sometimes be a net benefit for women.

“If divorce happens, women are usually the ones end up getting men’s pension.”

Katharine Browne, the coordinator for Philosophers’ Jams, said she thought Emmett’s focus on early modern women was a needed addition to their open forums that philosophy lacked.

“Philosophy suffers from an underrepresentation of women in the field, and I thought that a Jam that highlighted women’s contribution to the discipline would be a welcome and important addition to our schedule,” Browne said.

“As with all of our Jams, I hope that the talk will prompt reflection and discussion on issues that are philosophically interesting and socially significant.”