Dance classes are an uplifting treatment for debilitating disease

April is Parkinson’s Awareness Month, and one dance instructor is hoping to bring those suffering from the neurodegenerative disease together through dance.

Trina Frometa, a dance instructor and refugee from Venezuela, is teaching a class for those with Parkinson’s to explore movement and bring the community together.

Frometa first began her dance career after receiving a bachelor’s degree in dance while living in New York. After going back home to Venezuela, Frometa started a dance company called Projecto Movimiento. While Venezuela was experiencing a humanitarian crisis under Hugo Chávez, Frometa said she became an activist through her dance.

“The government didn’t like that,” Frometa said. “They cut my funds, they they banned me from performing in my theatres at home. I was not safe at home anymore.”

Frometa said she was forced to leave her mother, children, and dance company behind and move to the United States, where she received a scholarship to the Mark Morris Dance Centre in New York. It was there that Frometa became certified in teaching dance for those with Parkinson’s.

Frometa has been living in Canada for six months and said she is waiting on immigration to approve her refugee request.

“I hope it is a yes. If it is a no, I have to go back home and it is not safe still. That’s my nightmare and it’s on my mind every day,” Frometa said.

Frometa said she started a program in Venezuela called the Parkinson Project, a program designed to raise awareness about the disease.

“In Venezuela, there is nothing happening for people with Parkinson’s. They don’t have food. They don’t have medication. They’re cutting off the power, which means there’s no water either,” Frometa said.

Frometa said the project has since been stopped due to the current socioeconomic and political crisis happening in Venezuela. 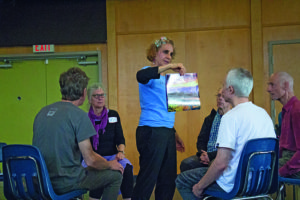 Frometa’s dance class is being taught every Wednesday at the Moberly Arts and Cultural Centre. Karan Dhami, a program assistant at the art centre, said that this event is important in bringing together the Parkinson’s community.

The centre will be holding a performance for the participants of the Parkinson’s dance class on June 29.