This story has been updated to include comments from Coun. Jean Swanson and Janet Smith of The Kettle Society.

A housing development for homeless people proposed in South Vancouver has neighbourhood residents worried about safety, while proponents are confident the parties can peacefully coexist.

The development, planned by the City of Vancouver and BC Housing and located at the intersection of Victoria and Marine drives, would provide 72 modular units for those who are homeless or at risk of being homeless, as well as a supervised injection site.

While advocates say such housing is badly needed, local residents say the development is incompatible with the neighbourhood.

“I think there are a lot of stereotypes about the people who use supportive housing,” Coun. Jean Swanson said. “Usually what happens after the supportive housing gets built, is all of the angst and fear subsides because the folks figure out that it’s not bad.”

If the proposal is approved, the new homes would be managed by The Kettle Society, which offers community services like meals, operates supportive housing and provides first aid, mental health and employment training.

“We interview people to see if they are fit as residents and compatible to stay in the buildings that we manage,” said Janet Smith, director of housing at The Kettle Society. “We also form a community advisory committee and ask people of the neighbourhood to work along with us.”

In 2020, the provincial and municipal governments together pledged to build 450 units of supportive housing on city-owned land. The proposed development would contribute to that figure.

Several area residents oppose the proposal and have asked the city to reconsider.

Tylor Smith, who lives right across the street in his parents’ home, said the well-being and security of the neighbourhood are a concern.

“There might be potential break-ins, attempted break-ins, maybe garbage, needles on the ground,” he said. “We don’t know what’s going to happen.”

According to Vancouver’s 2020 social indicator data, Victoria-Fraserview has the second-highest percentage of households with children. Children are present in 52 per cent of the neighbourhood’s households. Overall, just 30 per cent of Vancouver households have kids.

Victoria-Fraserview also has a larger percentage of elderly people than the Vancouver neighbourhood average, with 20 per cent of area residents aged 65 or older.

Fred Crisologo and his wife live next to the proposed site.

“This area is not the kind of place where there’s going to be such extensive housing, and all of a sudden building a six storey? It can be really uncomfortable for the [elderly] residents there.”

The area where the development is proposed is isolated from amenities and businesses. Eateries and shops on Victoria Drive are located 12 blocks up from the proposal, and there is a Chinese restaurant standing four blocks west on Marine Drive.

Ray Gill is a neighbourhood resident who is confused by the location of the proposal. He said while everyone needs a place to live, the makeup of the area is incompatible with the development.

“Victoria is a busy street, so is Marine Drive. It’s poor planning to have a tower in the middle of a single-family residential neighbourhood,” Gill said. “It would probably make more sense to put in where there’s already some multifamily buildings.” 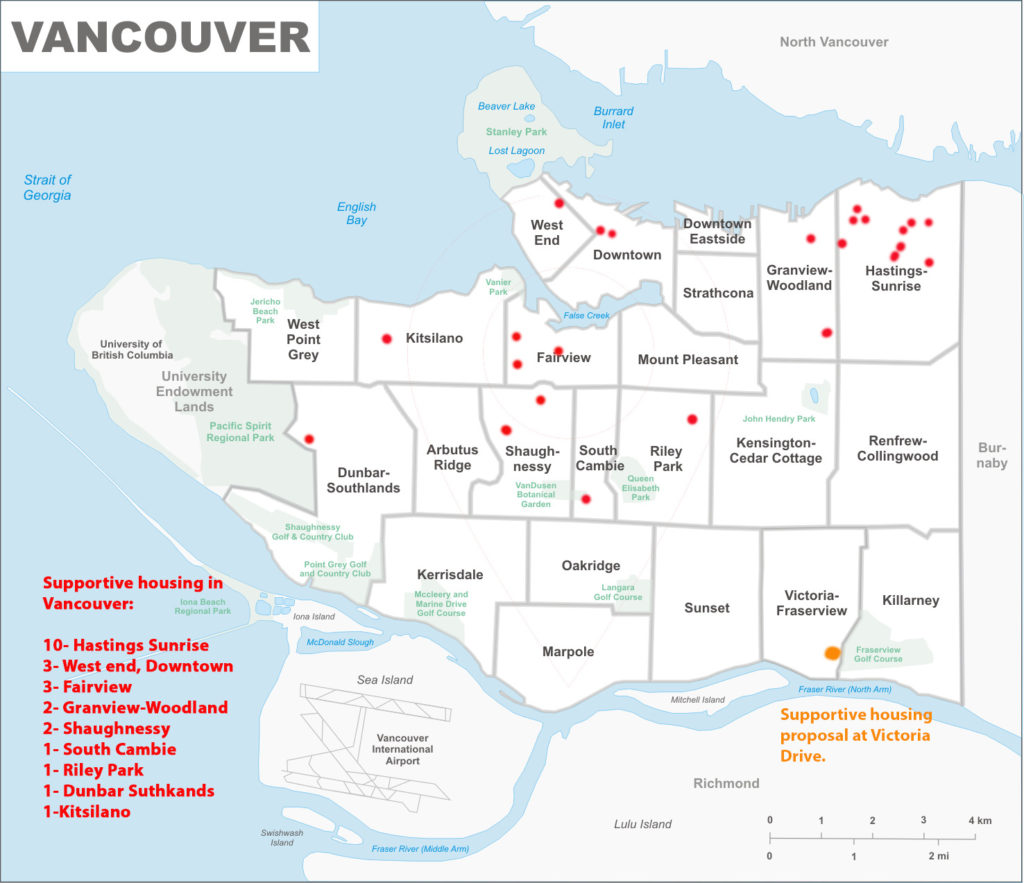 Watch the video above to hear more from Tylor Smith, a neighbourhood resident.