People have to change their relationship with the environment

This story has been updated to include comments from Langara coordinator Andrew Egan and an environmental sciences student at Langara Emily Crowley.

Precipitation patterns are shifting due to climate change, resulting in a greater reliance on ground water, said environmental science coordinator Andrew Egan. Groundwater is water that flows through the earth below, and because of its hidden nature, it is often overlooked.

Some areas in B.C. have abundant water resources, while other areas, like the Okanagan, still experience desert conditions.

To collect rainwater, people need a special barrel. In addition, they need to remember that they can use such water only for household chores and no more.

According to the Canadian government’s environmental sustainability indicators, several rivers, creeks and streams on Vancouver Island and in B.C.’s interior are at concerningly low levels. While Canada has one of the world’s most plentiful supplies of renewable freshwater, over half of America is experiencing drought, according to U.S. government data.

“Humanity has an interesting relationship with water where we are obviously dependent upon it, but we often overuse and abuse our surface water,” said Egan. “As a result, we become dependent on groundwater as a clean alternative.”

In Metro Vancouver, the average of water use per capita is 403 liters. While each American uses only 3.783 liters per day. In summer, the average is much higher.

The increase in population growth, the expansion of industry and agriculture all place huge pressure on the province’s water supply.

Groundwater is contaminated due to chemical spills

Zafar Adeel, the executive director of the Pacific Water Research Centre at Simon Fraser University, previously worked with the UN, including as chair of a group called UN-Water.

“Awareness tends to be quite low, and particularly when it comes to policy-makers or politicians, they don’t understand well,” Adeel said. “Once you contaminate groundwater sources … it can affect people drinking groundwater downstream, and it can also affect surface water if that water is percolating back into the stream.”

Groundwater can be contaminated through chemical spills or excess pesticides used in agriculture, according to Adeel.

The biggest issue facing groundwater is contamination, say both Adeel and Egan.

“Once it’s contaminated, it’s almost impossible to clean out, you can’t scrub it down, you can’t wash it off,” Egan said. “Is Vancouver going to be affected by changes in precipitation and climate change? One hundred per cent.”

He said that’s part of the reason his department continues with the Still Creek project, which collects data about the stream that begins in Burnaby and flows northwest into Vancouver. The lack of soil and groundwater surrounding Still Creek poses risks to the health of the stream, and could endanger spawning salmon.

Emily Crowley, an environmental sciences student at Langara, is part of the Still Creek monitoring program.

“The less vegetation, soil permeable ground cover that you have, the dirtier the stream is going to be,” Crowley said. “When water is able to flow from soil or through vegetation into the roots, it’s typically being filtered a lot better.”

“We have to think about how we can reduce energy,” said Koshelev, an interior designer who advocates for people to follow her lead. “When you [filter] water, you use a lot of energy, so if you save water at home you save up the most.”

The Seymour Capilano Filtration Plant treats up to 1.8 billion litres of water a day.

“There’s some communities that don’t have access to clean drinking water, which is pretty awful,” said Barber. “Water is a human right.” 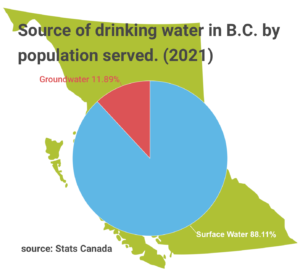