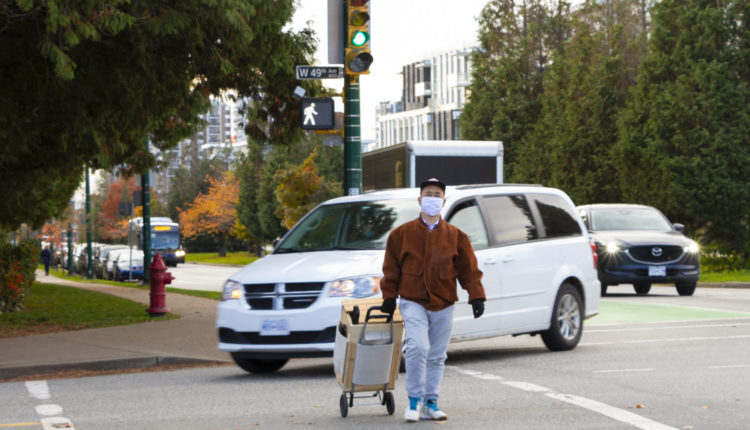 A pedestrian crosses West 49th Avenue as a car behind him makes a right turn at the Cambie Street intersection near Langara College. Photo: Claire A. Wilson

This story has been updated to include comments from ICBC and a pedestrian safety activist.

Sukhman Singh, a second-year student who studies food and nutrition services, witnessed a close call last month at Cambie Street and West 49th Avenue when a vehicle made a right turn on a red light.

“The car was turning, and they almost crashed into one of the pedestrians,” Singh said.

Singh said he feels unsafe when crossing the busy intersection and believes right-hand turns on red lights should be banned.

According to ICBC, the intersection had 15 crashes involving pedestrians between 2016 and 2020. Pedestrian safety activists say that ICBC’s education initiatives are not doing enough to prevent pedestrian collisions.

Martyn Schmoll, a pedestrian safety activist, has been critical of ICBC on social media.

“Pedestrians ultimately have very little control over their own safety. In a car-centric transportation environment, we really are very much at the mercy of the attentiveness and competence of drivers around us,” Schmoll said.

Schmoll said his attitude towards ICBC campaigns would change if the corporation demonstrated a correlation between educational tips and a drop in pedestrian fatalities and injuries. He says ICBC did not provide him with the data he was seeking.

“Their answer was that they measure the success of their campaigns in terms of impressions and engagement. In other words, the goal of those campaigns is PR community outreach and corporate visibility,” Schmoll said.

He believes the issue lies not in a lack of education for pedestrians and drivers but with Vancouver’s road infrastructure.

“Eighty per cent of people are hit in intersections where pedestrians are supposed to be protected by right-of-way laws and purpose-built infrastructure … It’s clearly not a pedestrian issue, it has to do with road design,” Schmoll said.

Winston Chou, manager of the City of Vancouver’s traffic and data management branch, said that intersections with high volumes of vehicles, pedestrians and turn movements have the most collisions.

Chou said that pedestrians are the most vulnerable, and when collisions occur, “the severity can be quite high.”

A dangerous time of year

Lindsay Wilkins, ICBC media relations adviser, said a campaign across the province is highlighting the dangers of the fall and winter season for drivers and pedestrians.

“You’ll see our local road safety coordinators out in communities distributing reflectors to pedestrians to help them be more seen,” Wilkins said.

“I always see a lot of crowds there waiting for the bus … I usually feel like something might happen,” Hassanpour said.

Chou said his team will be re-examining the intersection with a fresh lens.

“We’ll try and have a look to see if we can make some adjustments that are not very costly to improve pedestrian safety and priority at the intersection,” Chou said.

Watch the video below to hear Langara students speak about the intersection at Cambie Street and West 49th Avenue: