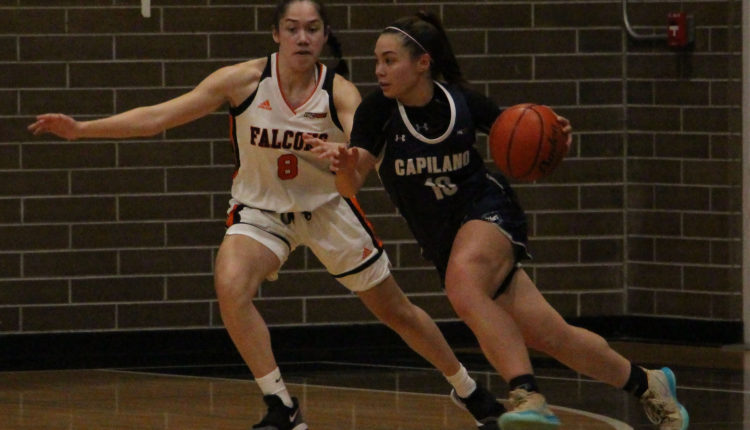 After being shut down due to the pandemic, PACWEST begins at Langara gymnasium.

The games marked the first PACWEST action for the Falcons since the 2019-20 season, before competition was cancelled due to the pandemic.

“They’ve [Capilano] got a lot of older guys, fourth- and fifth-year guys. We’re mostly first and second, and you can just tell,” said Falcons head coach Paul Eberhardt. “It was a difference between their experience, and you could see our nerves kind of got us.”

The Falcons were led by guard Chance Samuel, who sunk 19 points, including a pair of triples; guard Royce Sargaent with 16 points, including seven rebounds and a game-high three assists; and reigning PACWEST rookie of the year, centre Jas Dhudwal, who led the game with four blocks.

Eberhardt praised Langara forward Saleem Ali-Musa for a strong performance. After the game, Ali-Musa felt grateful to be playing despite the result.

“The loss is tough but it feels good to be out there,” the third-year player said. “It’s definitely a blessing.”

Capilano men’s head coach Alex Van Samang was enthused by the energy in the gym.

“Was that not the best Langara crowd in a long time right there, for both the men’s and women’s game?” he said. “This is the best entertainment you can get right now.”

The Capilano University Blues women’s basketball team overcame Langara’s red-hot guard Jayna Wilson, who scored all 12 of her points from behind the three-point line.

But in the end, the team could not keep up with Capilano, whose guards Jenna Griffin and Cassandra Brinn scored a game-high 17 points apiece, while Blues forward Kate Mallette came off the bench to dominate the boards, grabbing 12 rebounds.

“She really stepped up, did a lot of good things: boxed out, played point guard, rebounded, defended well,” Watson said.

Watson said the team “would have liked a win”, but was pleased with how the young unit, composed of mostly first- and second-year players, performed in their first game of the season.

“In the first half, we had tons of energy and we just couldn’t maintain that energy through the whole game,” Watson said. “Overall, we played really well and I’m pretty happy.”

“We’ve been waiting for this for a long time,” he said.

The Falcons will host the Douglas College Royals on Friday, Nov. 5, at the Langara gym.