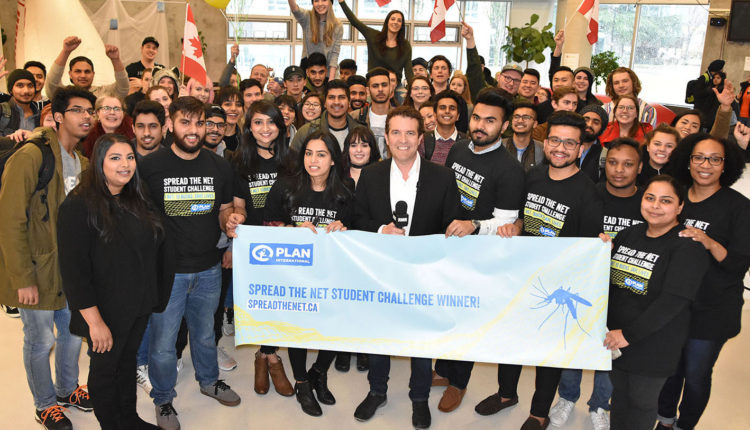 Spread the Net is a charity program established by Rick Mercer of Rick Mercer Report and non-profit organization Plan International Canada, a chapter of the global non-profit organization which aims to improve the lives of children and families in developing countries.  The goal of the program is to raise money for anti-malaria mosquito nets for households in Africa.

Leading cause of death

Malaria kills approximately 429,000 people each year worldwide(World Health Organization), and until recently was the leading cause of death of children in Africa.

Langara donated $14,695, which is more money than any other post-secondary school in Canada.

Mercer visited Langara on March 7 to thank the college for their donations.

According to Mercer during his interview with CBC, Langara has been donating to Spread the Net for several years.

“[Langara has] been involved in Spread the Net for quite a while. They’ve been fundraising for years now, but this is the first time they’ve won the post-secondary category.” Mercer said.

Many Langara students believe Spread the Net is a cause worth donating to. Journalism program applicant Mira Galperin is planning on going to Africa this summer, and understands the need for anti-malaria nets. She thinks it was good for Langara College to donate the money.

“I’m actually going to Africa and Asia, so I know the whole malaria scare that’s going on there,” Galperin said.” I’ve been prescribed malaria pills for three months.”

“I think that’s awesome, yeah, I think it’s a great cause,” Houtman said. “[but] honestly I have no concept of what goes on around here, which is bad as I’m a student, but we’re so busy.”
Mercer featured Langara, as well as the winning high school and elementary school on Rick Mercer Report Tuesday evening.