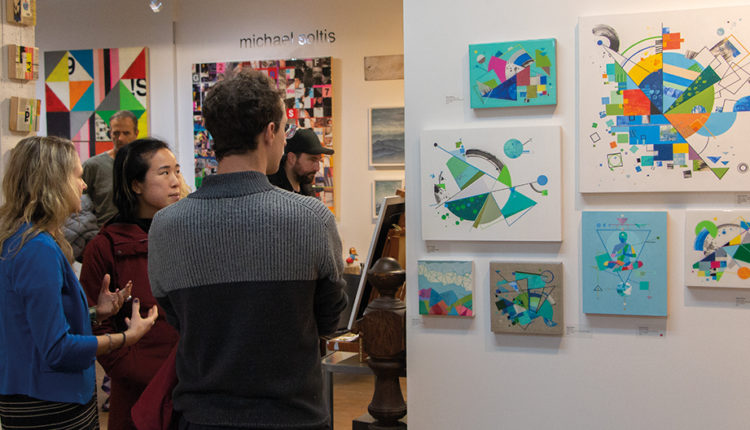 Ideet Sharon’s geometric art emerged from a discovery of meditation, now her paintings are drawing attention in the Vancouver art scene.

The Langara expressive art therapy student walked away from 20 years in the animation industry in pursuit of the abstract art form.

“Something happens when you start meditating and you start thinking about your life and what you are doing,” Sharon said.  “Am I thriving or just surviving?”

Sharon’s illustrations were displayed as part of the East Van Cultural Crawl from Nov.15-18 along with 500 others.  The open studio event attracts over 35,000 visitors who interact with artists from over 70 workshops.

Kurtis Baute and Xianny Ng, a couple who purchased a painting from Sharon, were elated by their find.

“It’s not just chaos, I feel like there is a structure to it in a way I find kind of pleasing,” Baute said.

That chaotic structure was Sharon’s intention.

She says she was influenced by the 19th century philosophy and abstract works of Hilma Klint, Wassily Kandinsky, quantum physics and naturally occurring geometric patterns.

“Some shapes seem separate but actually they are connected, there’s a lot of stories going on and they all are part of the bigger story, little stories within a bigger story,” said Sharon.  “They are all finding balance.”

But above all else, she credits meditation for the inspiration behind her work, saying she now sees herself as a conduit for the art form.

“Physicists are saying on a quantum field everything is connected,” she said.  “Musicians like Mozart and Bach were saying ‘I don’t make this music, I’m just hearing it.'”

Kari Kristensen leases the studio space that Sharon works in.  She said she’s usually picky about who she sublets space too, but has nothing but praise for Sharon’s ability.

“What’s most amazing about her, in the time that she’s been here, [is] the evolution of her work,” Kristensen said. “It’s impressive to see someone grow that much.”