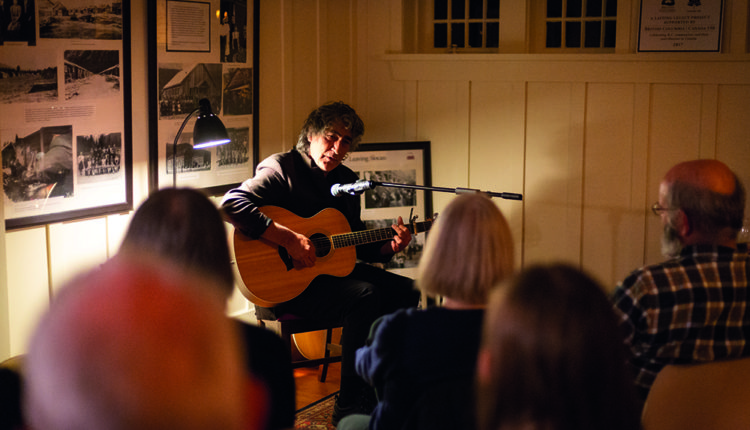 Joseph Maviglia performs some original songs for a small crowd gathered at the Joy Kogawa House. Photo by Kelsea Franzke

For one singer-songwriter, growing up with an oral tradition has led to the dynamic creation of his art, inspiring his use of story and language.

Renowned for his energetic musical performances, Joseph Maviglia performed at the Historic Joy Kogawa House this past weekend. As a singer-songwriter and spoken word artist coming from a southern Italian background, Maviglia became attuned to the expression of story through spoken word at a young age. This experience with oral tradition often inspires his creative process when writing new pieces.

The intimate event was held on Saturday evening with approximately 20 audience members in attendance. Maviglia recitied original poetry and songs in the living room under a single dimly lit lamp. The only musical accompaniment was an acoustic guitar, which Maviglia played himself.

“Very early on my ear was open to the way something was expressed and the dynamic it was expressed in,” Maviglia said. “Later on that merged in with the formality of my education, so a bit of both worlds were there to mix and match.”

The event began with pieces from his first poetry book A God Hangs Upside Down. Maviglia drew the audience in with moments of self-reflection, humour and social commentary. He also performed his song, Father It’s Time, which was on the 1992 Juno award winning compilation album, The Gathering.

Trish Paquette, a new member of the Marpole community, was enamoured by the warmth of the evening.

“I didn’t expect this to be such an intimate evening,” Paquette said. “I enjoyed listening to his perspectives. There were some really deep thoughts that provoked further thought and reflection in ourselves.”

The meaning behind the music

Another audience member, Bruce Webb, said he appreciated the artistry behind the music, despite not always understanding the meaning.

“I didn’t understand every metaphor or image that was being presented, but I connected with pieces and it really transformed me back in time. This is a very intimate and warm environment – such a great venue for this kind of event,” Webb said.

Prior to his performance, Maviglia said he was most looking forward to sharing his art and experience with the community.

“I love the feeling of people being engaged and experiencing a creative moment. Not necessarily my moment, but one of theirs. Perceptive moments in oneself make interesting changes in the way you think and feel. That’s interesting to me,” Maviglia said.

Sheilagh Cahill, a member of the board at the Joy Kogawa House, said that Maviglia’s performance inspired self-reflection and appreciation for Canadian culture.

“It was a very colourful and reflective performance because it really spoke to us as Canadians, coast to coast. I really enjoyed that part of it because there was a lot of different dimensions,” Cahill said. “He drew in all the different characters that we have as Canadian people.”

A safe haven for artists

As a heritage home in the Marpole neighbourhood, the Historic Joy Kogawa House acts as a creative and inspiring haven for writers.

The Joy Kogawa House offers writers and artists two-month residencies to work on writing projects in exchange for service and workshops for the community.

Workshops at the house

During his stay, spoken word artist and singer-songwriter Joseph Maviglia held workshops on the transformation of spoken word to song, as well as how metaphor and words change with performance.

“The house is really great being in such a quiet neighbourhood. I can get up at four in the morning and start to play two or three songs and go on with it. There’s really no intrusion on the space which is wonderful,” Maviglia said

Ann-Marie Metten, the director of the Joy Kogawa House, says that when choosing which writers will stay at the house next, they seek artists writing from the margins of the dominant culture.

It’s important that writers working at the Joy Kogawa House are socially conscious and produce work that raises  awareness about a marginalized experience.

How the art connects the community

“When choosing which artists will stay at the house, it’s really about service to the community and how they will engage local writers,” said Metten. “But it’s also the writing project they work on, and how meaningful the space will be as an inspiration for that project.”

Metten believes that the performances held by the artists at the end of their stay are meaningful for connection in the surrounding community. 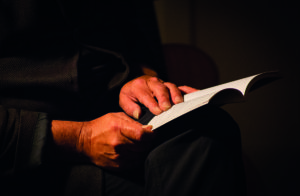 “I want people to have a feeling of connection and community. It’s about healing the loneliness that we all experience, and it’s all about connecting across cultures and across barriers,” Metten said.