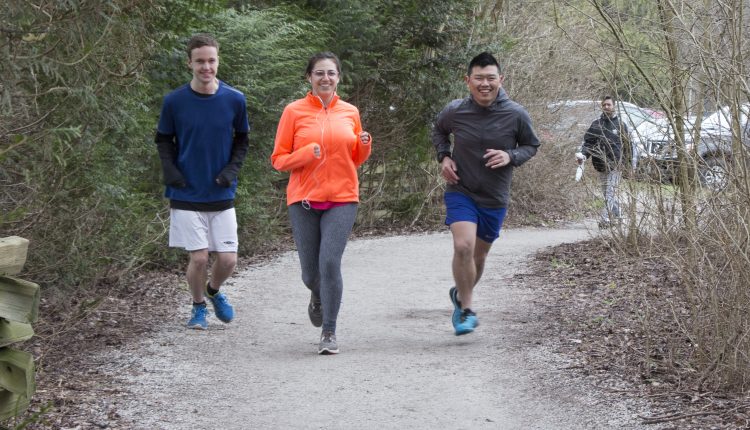 Members of Langara's Run Club jog on the path beside the Langara Golf Course, taking a moment to de-stress. Photo by Rica Talay.

With marathon season coming up, the Langara Run Club is a training space for students on campus hoping to manage their stress and compete with other Vancouver runners.

The club meets once or twice a week to do laps around the Langara Golf Course trail. Some of the members are training for upcoming races while others just run for fun.

Ashley Triebwasser, a first semester health science student, joined the club this term and is training for a half marathon.

“It’s sometimes hard to make time for running but I have to remind myself that it’s a really good de-stresser,” Triebwasser said. “I find that balancing [school and running], I can actually do both better. They kind of go hand in hand.”

Running is more than fitness

“Often people who have trained for a marathon start to realize that running is a really important regular activity just to manage their mental health,” Cawsey said.

Steven Tsai, a criminology student who is taking a break from his studies to work, is active on the club’s Facebook page and is also training for the upcoming marathon. He said resting part is the hardest while he’s training because it’s important to know when to limit yourself.

“It really relates to knowing what the body can take,” Tsai said. “Based on that you’d know where to improve and know when to rest.”

Nicholas Hare leads the club and said although the club has roughly 60 people signed up for this semester they will get an average of three to four members coming out for each run.

This is Hare’s first year leading the club. He wanted to lead it, simply because he wanted to keep the club going. Hare will be transferring to UBC next year to study geography and is looking for a replacement leader.

“As of right now I don’t have any idea about what’s going to happen next year,” Hare said. “Perhaps we can find a replacement leader, that would be my goal to see it continue, after I’m gone.”