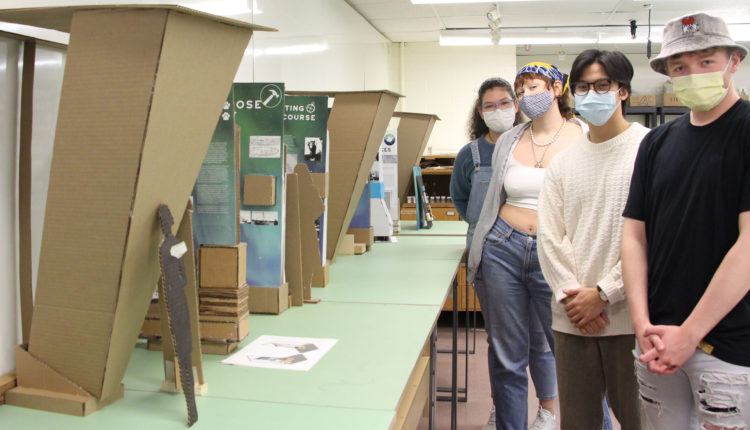 This story has been updated to include quotes by Graeme Rolfe and Duncan MacLeod.

The curator of the Vancouver Maritime Museum is impressed by the creativity of a Langara design formation class working on a new exhibit commissioned by the museum.

The exhibit, called St. Roch Stories, is about an RCMP ship that navigated the Arctic in the early- to mid-20th century and is on permanent display at the museum.

The class, which focuses on exhibits and events, will display its exhibit in Langara’s design formation studio throughout December and then at the museum beginning next spring.

The exhibit will include several vertical structures, with one side of each structure resembling an iceberg and the other resembling the northern lights. Each structure will be imprinted with information about the ship.

Curator Duncan MacLeod said the students contributed “innovative and exciting ideas,” which creatively incorporate the museum’s vertical space. An idea that stood out to the curator was to make the information partially hidden by the heights of the structures, which adds an element of discovery and exploration to replicate the Arctic environment.

“It’s not an easy space to work with,” he said. “We’ve been very impressed with what the students have come up with this year.”

MacLeod said the museum worked with Langara design formation in 2020 on a virtual exhibit called Sea Signals. Once restrictions related to the pandemic eased, the museum hoped to partner with them for a physical display.

“We decided that this year would be our chance,” MacLeod said.

Second-year student Raff Torres said he feels overwhelmed that clients from the museum expect to view the completed project by Dec. 3.

“It’s like, ‘Gosh, this is it. This is real world stuff,” Torres said. “It was a reality check. This is an actual client. This is no longer just school stuff.”

MacLeod Kaulius agreed the partnership was daunting but appreciated the opportunity to get working experience.

“It’s been a super hard project, but one of those things where it’s the closest any of us have probably come to the real world,” the second-year student said. “That is that feeling of just being beaten to a pulp, but in a good way.”

According to design formation instructor Peter Vysek, themes of the exhibit include the Arctic environment, navigation of the ship and the people and animals aboard the St. Roch.

While participation in the exhibit will improve student portfolios, Vysek is excited the class will contribute to local community and culture.

“Thousands of people will see [the exhibit],” he said. “There’s also a bit of a legacy that exists beyond the end of the course.”

Graeme Rolfe, who visits the museum four to five times a year with his children, said they will check out St. Roch Stories once it’s on display.

“We were thinking about getting a membership again,” Rolfe said. “It’s great for the kids to come here.”

Watch the video below to see design formation students prepare for their exhibit at the Vancouver Maritime Museum: