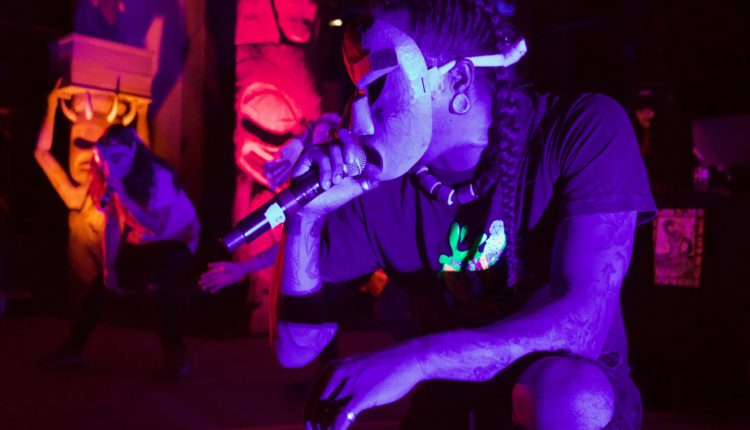 Spoken word, hip-hop and a book reading were all present at last Thursday's event.

Neon totem poles were set up alongside ancient artifacts at the Museum of Anthropology and the usually quiet space echoed with the sounds of hip-hop and spoken word at an event aiming to spotlight Indigenous artists.

Prominent Indigenous performers and writers brought their stories to Trickster and Transformers: An Evening of Indigenous Word. The event is part of the University of British Columbia’s inaugural Artivism festival, which aims to spotlight artists who challenge the mainstream through performance and art. Quinton Nyce of Snotty Nose Rez Kids says he doesn’t identify as an artist activist. “We’re Indigenous artists, doing what our ancestors have done for thousands of years.”

The event, held on unceded Musqueam territory, was hosted by Christie Charles, Vancouver’s fifth poet laureate and the first Indigenous person to hold the position. She performed Musqueam and English language songs and poetry at the MOA, surrounded by her ancestors’ belongings.

“We’re in this time where everybody’s so curious about what First Nations people are doing, what stories we’re telling, and what movements we’re making,” said Charles, who believes a space like the MOA leads to greater understanding of First Nations storytelling.

“People can say, wow, these belongings, they’re thousands of years old, yet these people are right in front of me speaking the same language and talking about the same stories,” said Charles. Her ancestors, she said, are waking up to the sounds of their language and people. “It’s very magical.”

Author Eden Robinson was also in attendance to launch her newest novel. As a writer in Kitamaat Village, she served as an inspiration to a young Metz and Nyce. This is the first time they have been featured at the same event.

“Eden started in literature and fiction novels, and we get to tell our story on rap records,” said Nyce, Robinson’s cousin. “I think it’s very important to bridge those two art forms in a space like the Museum of Anthropology.”

DJ Kookum provided upbeat dance music for the evening against a backdrop of neon-lit totem poles.

Litter piles up after Langara students told to butt out