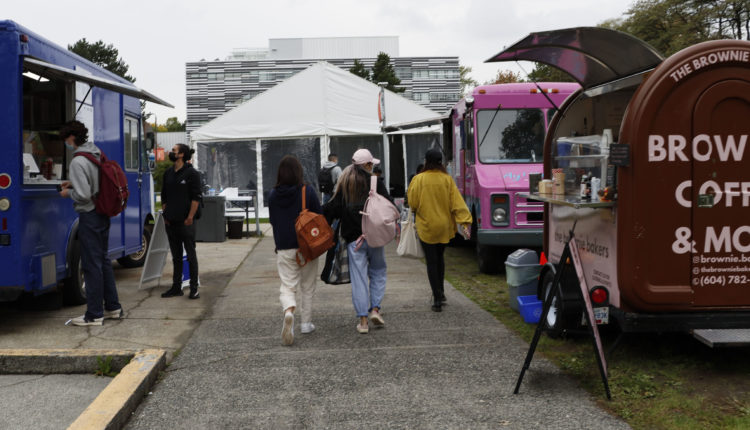 The food truck industry has been seeing drastic changes since the start of the pandemic, with the City of Vancouver introducing curbside electricity and business owners choosing more flexible permits.

The city began a pilot project offering curbside electricity to some stationary locations almost three years ago, but is now intending to provide it to high demand areas where roaming food trucks park by the end of the year. One of the reasons for the decision was that residents had started to complain about the noise caused by food truck generators.

Scott Edwards, manager of street activities and engineering services for the City of Vancouver, said the city made the decision in order to support food trucks.

“We’re trying to provide opportunities for them to shift towards green operations,” Edwards said, adding that some of the benefits to curbside electrical supply include cutting down on greenhouse gas emissions and noise from the generators.

Kai Walker, an employee of Boca’O Spain In a Bite food truck, said this will help their truck in the long run. The noise from the generator has been such a disturbance to local residents that the employees have tried to silence the noise using a muffler.

“Sometimes we’d park in [the] Olympic Village and so we would get complaints,” Walker said. “If we could go fully electric [and] not have the generator, that would be wonderful.”

Edwards said, adding that feedback from food truck owners has been overwhelmingly positive.

“You can actually enjoy the peace and quiet, not drowned out by the sound of a generator,” Edwards said.

Another shift in the food truck landscape includes more food truck owners switching to roaming permits instead of stationary. Roaming permits allow food trucks to change locations, though there can be a limit on the number in one place at one time. Stationary permits restrict food truck operators to one location.

Edwards said food truck vendors want to be where customers gather. Because of social distancing requirements and changes in spending habits, many owners want the option to move around, and be closer to parks and beaches.

“There were some vendors that actually had a stationary permit and switched their business model to be a roaming permit,” Edwards said. “Because many individuals and residents in Vancouver began to enjoy outdoor spaces scattered all over the city.”

Dinner for the socially distanced

The pandemic has affected the food truck industry in other ways, too.

According to Jason Faria, owner of the Greater Vancouver Food Truck Festival, there are now more food truck businesses than before the COVID-19 pandemic, because they are a safer food service alternative to restaurants.

Many entrepreneurs bought food trucks at a discount when the industry was at a low, early on in the pandemic. As public health restrictions lightened up, Faria noticed a 20 per cent increase in new trucks over the past year.

“They are outside, they are low contact as opposed to a restaurant where you are seated indoors near people,” Faria said.

Kelly Chau, who runs her mobile truck The Brownie Bakers, said food trucks provide her with freedom to be her own boss.

“I enjoy working for myself and building my own dreams instead of helping someone else,” Chau said.