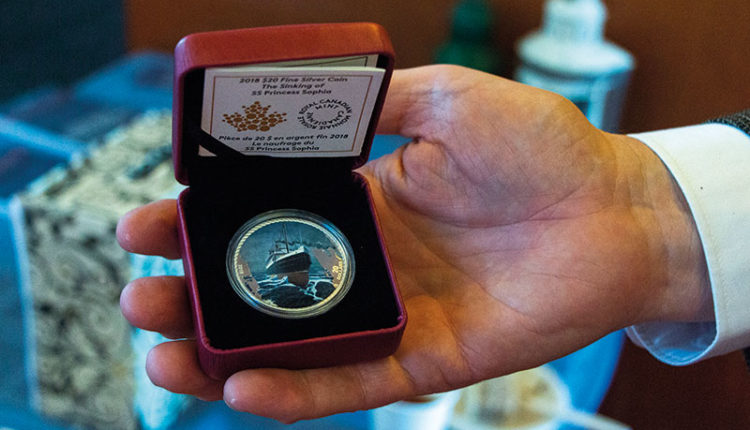 A commemorative coin depicting the SS Princess Sophia produced this year by the Canadian Mint. Photo by Roxanne Egan-Elliott

Considered Canada's Titanic, the sinking of the Princess Sophia cost nearly 400 lives but has been largely unheard of

For David Leverton, who has been trying to tell the largely unknown tale of the sinking of the SS Princess Sophia for 40 years, the tides are finally turning.

In the century since the steamship sank, taking all on board down with it, relatively few have heard of the deadliest maritime disaster in B.C.’s history.

Leverton, executive director of the Maritime Museum of British Columbia in Victoria, has been working to change that. “It’s always been about public awareness. It’s too important a story not to remember and not to appreciate,” he said. 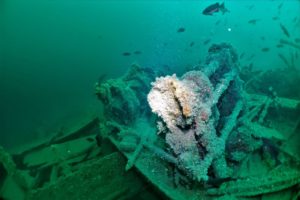 The Canadian steamship was traveling south from Skagway, Alaska, when it ran into Vanderbilt reef in Lynn Canal. The Princess Sophia remained stranded on the reef for 40 hours while rescue boats waited nearby for dangerous weather conditions to abate so a rescue effort could be mounted.

Instead, in the afternoon of Oct. 25, 1918, the ship slipped off the reef and sank quickly. Best estimates place the death toll between 364 and 368 people. Timepieces recovered from the wreck read 5:50 p.m.

As a university student, Leverton learned of the disaster through hearing a song by Steve Hites called The Last Voyage of the Princess Sophia. This past weekend many more were introduced to the tragic story by a commemorative concert created by a local music group.

Many passengers are buried at Mountain View Cemetery

Produced by The Little Chamber Music Series That Could, a concert called Sounding the Sophia was the brainchild of Molly MacKinnon, who discovered the relatively unknown story while digging into local history of Mountain View Cemetery, where 74 of the dead are buried.

“I thought it was very interesting that I had never heard of it, and I think a lot of people haven’t heard of it,” she said. “It’s kind of the Titanic of the Pacific Northwest.”

Leverton has organized events this year in Alaska, Yukon and B.C. to mark the anniversary. “I’m really appreciative now that a lot more people know about it,” he said. “The time and energy and effort that’s gone into this performance tonight is a tribute to all of these people who lost their lives in such an untimely way.”

Joan Dublanko, who watched the concert Friday, didn’t know the story before she attended the event. It was a sentiment echoed by many in the audience.

“The music really put you there. It was very transporting,” she said of the performance.

After decades of trying to bring the tragedy into the public consciousness, Leverton finally feels some closure.

“The story is about the people. It’s always been about the people,” he said. “At least, 100 years later, we can bring closure. We’ve really done all we can do to get this story out there.”

With that, Leverton will move on to his next tale of hidden history, an ill-fated scientific expedition to the Arctic from which half the crew would not return.