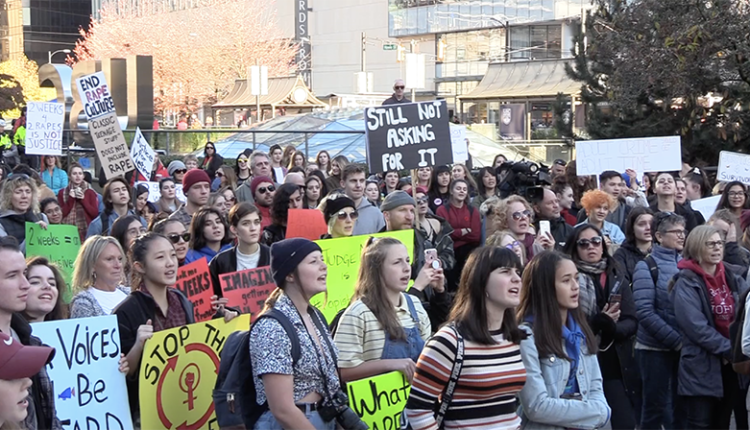 Protesters listen to speakers at the protest outside the courthouse. Screenshot from video.

Before last weekend, Yalda and Mitra Kazemi, had never organized a protest. The two sisters were driven to action when they read about the outcome of a sexual assault trial on the North Shore.

Judge Paul Meyers sentenced a young man to serve two weeks in youth detention after finding him guilty of one count of aggravated sexual assault, one count of forcible confinement and one count of sexual assault. The remainder of his three-year sentence will be served in the community where he will be subject to conditions and supervision.

There were two female victims who cannot be identified due to a publication ban.

The young man was arrested in 2016 for an attack on one of his classmates at a high school graduation party at a club downtown. He was subsequently charged with the 2015 sexual assault of another victim.

The crown recommended a three-year sentence, to be served in youth detention.

Although this particular case was the impetus for the protest, the crowd and speakers used the opportunity to voice their support for sexual assault survivors and to address issues of justice and accountability for perpetrators.

Reporter Kathryn Tindale covered the rally and captured some of the remarks made by organizers, one victim’s family and local activists.

Canada reflects on the sacrifices made by Indigenous veterans