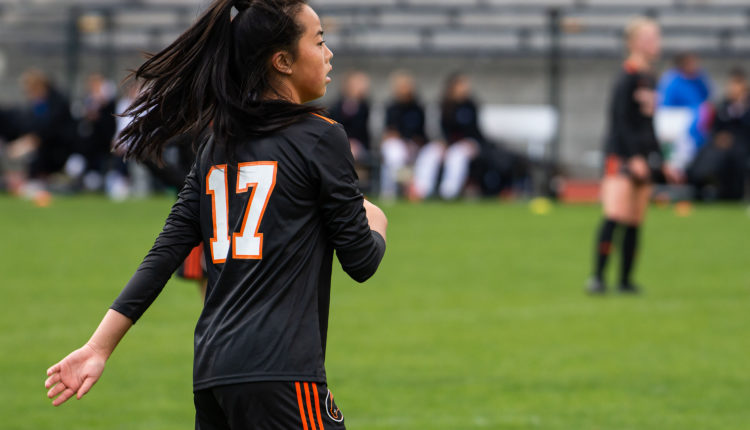 Langara’s soccer coaches use new sports technology to stay on top of their game.

This story has been updated to include quotes from Samantha Seaborn and Aidan LaBreche.

Due to the restrictions of the COVID-19 pandemic, the Langara soccer teams have rethought the way they go about training and recruitment.

In the fall of 2020, B.C. implemented mask and physical distancing mandates that resulted in the stoppage of all conference competitions. This lack of competition disrupted the flow of a typical season.

In the interim, new virtual training and recruitment methods have been added in order to minimize disruptions and strengthen the teams.

“That was difficult, very difficult, but it was for everyone’s safety,” said Jake McCallum, the director of athletics and intramurals department.

One of the most exciting implementations from the hiatus, is a video analysis software called Hudl. It allows coaches to assess the performance of their players as well as the opposing team. The hope is that these new technologies will translate into wins for the Langara soccer team.

“We always want to push the envelope for new stuff, new technology,” said Marc Rizzardo, the head coach for the men’s soccer team.

For Aidan LaBreche, team captain and third-year general studies student, Hudl offers the chance for more accurate introspection into areas of improvement both individually and as a group.

The women’s program has mirrored the adoption of new training methods through its growing partnership with the kinesiology department. By partnering with the applied human performance research team and assistant coach Dr. Andrew Perrotta, the team has spent the last six months analyzing their performance in ways they’ve never done before.

Perrotta and his team break down health factors such as resting heart rate, blood pressure, body composition and weight. These are examined in order to understand their relation to athletic performance. Using Polar Team Pro software and their heat tracking capabilities, the team is also able to determine whether players have achieved their strategy objectives.

“It keeps you honest and accountable and that’s one of our team values as well,” said Samantha Seaborn, third-year nursing student and player on the team.

A new era of recruiting

Thanks to the break in competition from COVID-19, Mark Eckerle, head coach for the women’s team, was able to build an infrastructure around the incorporation of team values into training. This time also allowed Perrotta to gain the trust of players and dissect the data of the female team sport athletes, an area that he says is under-represented in research.

Not only did the training program see a shift but so, too, did the way coaches recruit.

“We became more or less a media company,” said Eckerle.

Potential recruits would upload videos to Google Drive folders, allowing coaches to break down the videos and come up with individual development plans for each player.

While this provided a way to work around the restrictions of the pandemic, frustrations arose from not being able to see the player on the pitch. In addition, it hinders the ability of the new recruits to form social connections, said LaBreche.

According to Rizzardo, the goal is to switch back to in-person recruiting at the end of the season.