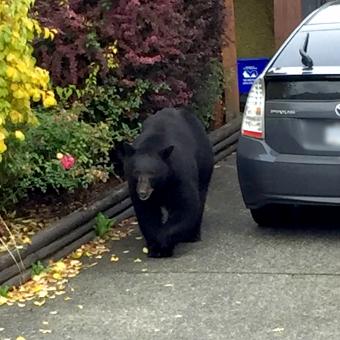 Coquitlam has begun its annual campaign to remind its residents to be “bear smart” because bears will soon wake up from hibernation and wander through neighbourhoods in search of food.

The city’s campaign, which will include social media, advertising and door-to-door canvassing, has operated for 10 years. But many residents still disobey bylaws that prohibit garbage cans and green waste bins from being placed on the street the night before designated days for pickup.

“Garbage is the number one attractant,” said Craig Hodge, a Coquitlam city councillor. “I think we’ve made good progress through education and enforcement but there’s no question that more needs to be done.”

Fines and warnings already in place

Coquitlam made changes to its garbage collection and increased enforcement of it solid waste bylaw. Residents are fined $500 if they feed bears, and that includes when a bear knocks over a garbage can and eats the waste. The city issued 1,643 warnings and 315 tickets in 2016.

The number of calls to conservation officers increased after a bear attacked a young girl last August in Port Coquitlam, near the Coquitlam River. Karn said city bears typically cross boundaries of the Tri-Cities, which includes Port Moody.

“There was a girl who was attacked by a bear in the Tri-Cities last year so that brought a lot of awareness to the bear in the area,” said Julie Kanya, Coquitlam’s urban wildlife coordinator.

“I think our biggest challenge isn’t so much that we’re displacing the bears,” Hodge said. “It’s that we’re drawing the bears into our neighbourhoods and that’s why we’re working so heavily to deal with bear attractants, garbage and so on.”

“We brought in a number of initiatives over the last couple of years to try to reduce human and wildlife conflict,” Hodge said.