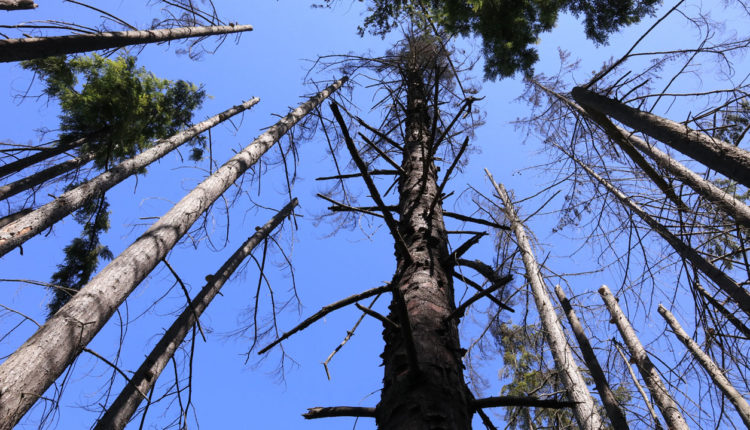 Looper moths, which eat evergreen needles, are to blame among other factors for the decline of tree health in Vancouver. Photo courtesy: Peter Woods

While riding his bike around Stanley Park in the beginning of August, Norm Oberson noticed a change in hemlock trees at Brockton Point.

“They were all dying just after the heat wave. I’ve never seen anything like it in Stanley Park,” he said. “Even now they are all standing dead.”

Oberson, an arborist at Arbutus Tree Service, is one of several people who have noticed severe changes to the health of trees in Vancouver. Trees suffering from drought are at greater risk from insects and are more likely to fall down from storms, like the violent one in early November. Many scientists connect these events to climate change.

Oberson said extreme temperature, such as last summer’s heat dome, can be the first blow.

“The tree survives, but it’s stressed,” Oberson said. “[Then] a bacteria or fungus attacks because the tree’s defence system has been weakened. So, it’s susceptible to attack from other living or environmental things.”

When a severe storm moved through the Lower Mainland on Nov. 9 — on the heels of a deepened low pressure system that swept over the south coast over the weekend of  Oct. 23 — many frailer trees toppled, disrupting power lines and forcing the closure of Langara College.

Dwayne Doornbosch, director of the facilities department at Langara, said due to the summer drought earlier this year, his team has been walking the grounds daily and more aggressively pruning to keep a close eye on the trees.

“We do regular assessments of all trees on campus with an arborist. We then prune or cut trees down accordingly,” he said.

Mike Mackintosh, a Vancouver Park Board ranger, said it is likely there will be more tree damage this winter given so many are unhealthy.

“Trees are very shallow rooted. When high winds occur, there is going to be a certain amount of loss,” Mackintosh said. “Coming on the heels of a drought that we’ve had this year, we are likely to be experiencing a greater loss than normal.”

The water table is currently high because of the recent rains, making things worse as it can flood the roots from below.

Mackintosh said with extreme weather, excessive water can cause rot and fungi to develop. Both can weaken trees, making them prone to falling over.

“When the winds hit a lot of those trees, they lean over,” he said. “But because of their weakness, at a certain point they’ll actually break off at the middle of the tree rather than the tree cascading over from the roots, and it’s terrifying.”

“Looper moths will basically bite off the whole needle, so they can cause a lot of damage to trees,” Lansdorp said, adding that drought combined with the looper moths had a compounded effect. “In a year where there was no drought, the looper population, like we saw this year, wouldn’t have been as destructive.”

Mackintosh said the impacts of climate change are significant in a metropolitan area.

Watch the video below to hear Olga Lansdorp provide insight into the threat that looper moths pose for Vancouver’s trees:

Voice Radio Ep. 29 – College and career in a new age