In the face of soaring gas prices, B.C.’s decision to raise its carbon tax is still a good one, say experts and drivers.

Nica De Guzman, a student at Langara College and the only driver in their family, spends $100 a month on gas for their car — after paying only $60 a month before the recent price spike, largely driven by the Russian invasion of Ukraine.

“I’m only part-time minimum wage working and to pay for insurance, too, that was also really hard,” said De Guzman. “Sometimes, I just don’t want to drive.”

Despite the increase in price, De Guzman appreciates the carbon tax, which B.C. increased April 1, from $40 to $45 per tonne of carbon. This move is part of a provincial plan to shift away from a reliance on fossil fuels. The price will rise by $5 every year.

“It’s always great to cut down on carbon emissions.”

“The climate crisis is not waiting; it’s getting worse,” Harrison said. “The only way we can protect the future of humanity is to transition away from fossil fuels.”

B.C. started its carbon tax in 2008. It was the first to introduce such a tax in North America.

Cam MacDonald, a biology instructor at Langara, said the price increase translates to around three cents more per litre. MacDonald, who drives a car to Langara, supports the carbon tax.

“I’m a fan of carbon taxes even though I’m a driver and I pay that extra money,” MacDonald said. “I think it’s an important way to, you know, incentivize changes in behaviours.”

Despite his enthusiasm, MacDonald said, three cents wouldn’t really change people’s pocketbooks dramatically. “But it is going to trickle through other costs,” he said.

The Canadian Taxpayers Federation has complained that B.C. pays the highest carbon taxes in North America. According to emissions data released by the provincial government in 2021, emissions have increased 10 per cent since 2015 and have gone up in five of the last seven years.

Bryan Breguet, chair of the economics department at Langara, said the carbon tax is a function of supply and demand.

“Whenever we increase the price of one tonne of carbon, then the carbon tax will increase and so you pay more, all things being equal,” said Breguet.

B.C.’s government offers a carbon tax rebate, designed to help low- to medium-income families, and adjusted based on income. Despite the rebate, Harrison said that the carbon tax is still effective in reducing fossil fuel use.

“The way the rebates are designed, is that it doesn’t undermine the financial incentive to reduce one’s fossil fuel use,” Harrison said. 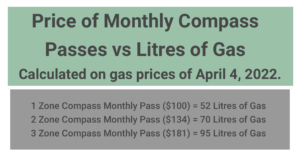