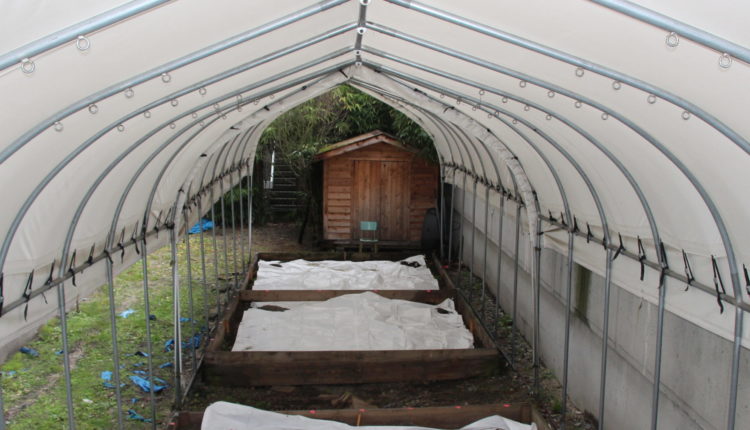 A view of the Langara community garden showing what is growing.Photo: Lesia Pogorelo

Farmers forced to adapt due to climate change

For two weeks now, the rain has fallen steadily and relentlessly on Diljit Kaler’s farm in Abbotsford.

It’s damaged his roof and killed his blueberries. And there’s still more rain to come.

“We have to change [the roof] next week,” he said. “The plants will die here.”

For Kaler, the owner of B & K Farms at 34965 Anderson Road in Abbotsford, the real damage will come next year when he can’t sell his products.

“The fruit is all under water,” he said Monday.

There’s no respite in sight. A prolonged period of heavy rain today is expected to continue through Wednesday. Unprecedented flooding has left farms like Kaler’s underwater, and volunteers and crews have been working to set up sandbags to hold back Sumas River floodwaters in a desperate bid to reduce more damage.

Melanie Kuxdorf, the communications and marketing manager at UBC Farms, said farmers in their network are telling similar stories with no one knowing exactly what the future will hold for the agriculture industry.

According to Langara’s environmental studies coordinator Andrew Egan, most of the Fraser Valley is built on a floodplain.

Over the last 10,000 years, the river has continuously flooded the surrounding area and while it doesn’t flood every year, Egan said it’s happening more frequently.

“That builds up layers of sediment, and then your plants grow on top of it,” Egan said. “We have stopped the river from flooding, by building dikes. And then in the soils we add fertilizer, we add more soil to it. Slowly over time, we affect the soil.”

Egan said there have been regular floods over the years, including one in the 1940s and another in the 1990s, but the current flooding in Abbotsford is “epic.”

“It’s not even the Fraser, it’s another river that’s affecting it,” Egan said. “But this is what happens when you build infrastructure that doesn’t have the capacity to hold back these large-scale storms.”

At UBC Farms, which helps train new farmers, Kuxdorf, the communications and marketing manager said the agriculture industry has to change.

“Climate change is already having a huge impact on agriculture, and it will continue to have an impact and everything from surviving heat waves to floods, but then also the changes with biodiversity,” she said.

For the last two years, new farmers have started to recognize that everything is interconnected and that is going to be increasingly important for the industry to recognize, especially when it comes to the ecosystem.

She said someone who’s studying soil has to also understand the food system in general. They also must get a better understanding of the biodiversity and the water systems and how everything is connected.

Farmers in other parts of the province are trying to figure out how to help the farmers in the Fraser Valley.

“We’re having our staff either help by working with them or volunteering with some cleanup,” Kuxdorf said. “We’re seeing if maybe we could take on some livestock.”