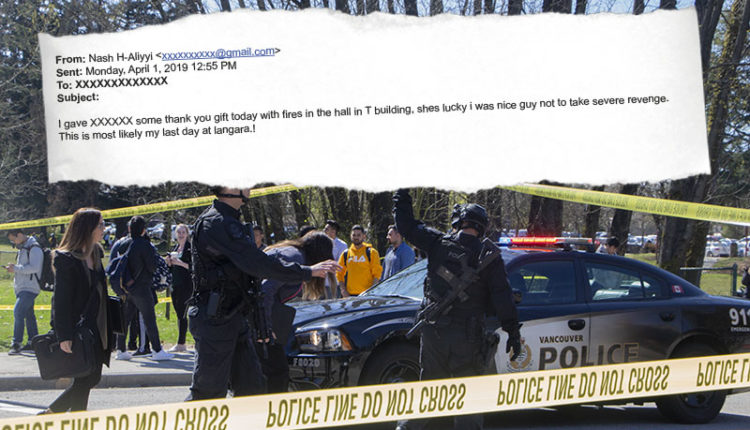 Clarification, April 3, 2019: A previous version of this story stated that Nasradin Abdusamad Ali carried at least three incendiary devices into Langara’s T Building.  In fact, he is only of accused of doing so.

Editorial decision, April 4, 2019: A previous version named the administrator who was targeted.  We have removed the name at the college’s request.

An email written by the man charged with the arson attacks at Langara College seemed to indicate the incendiary devices detonated on campus were directed at a chemistry instructor and the one member of the college’s administration.

On April 1, Nasradin Abdusamad Ali is alleged to have carried at least three incendiary devices into Langara’s T Building and set fires to the second and fifth floors.  The building was filled with students in class and writing exams.

The email, obtained by The Voice, was sent to the teacher shortly after the fires were set in the T Building. It referred to one college administrator.

“I gave [the administrator] some thank you gift today with fires in the hall in T builfing, shes lucky i was nice guy not to take severe revenge,” the email read. “This is most likely my last day at lanagara.!”

The entire campus was evacuated by heavily armed VPD units to conduct a security sweep. No one was injured.

The Voice has decided not to publish Ali’s teacher’s name because of safety concerns. The fire set on the fifth floor was a mere five metres behind the teacher’s office.

“This was right outside my office. I get the message. I don’t want to aggravate or worsen or remind him of who I am… I don’t want him to remember me at all.”

The teacher described Ali as a “somewhat neurotic” but friendly student.

But a month prior to the fires, the teacher said he broke up a fight between Ali and another student, allegedly sparked by a comment the other student made during class.

According to the teacher, his class was suddenly disrupted by two students on the verge of a brawl and were standing “nose to nose.”

The instructor said he immediately separated Ali and the other student, whose face was bleeding. The teacher said he told Ali to go home.

Afterward, the teacher said he reported the incident to the college administration, and was told Ali was prohibited from coming to class and would write his exams in another office.

The administration was not available for comment by the time of publication.

The teacher spoke of another incident he had heard about, involving another of his students.  The Voice contacted the student, who confirmed he’d also had an altercation with Ali but declined to be interviewed.

In January of 2018, Ali was charged with uttering threats and theft under $5,000. Those charges were stayed.

No room in the rental market for minimum wage workers